Having eked another day out of our stay in Columbia our flight to Lima was late evening via Bogota again and arriving in Lima at about half past midnight. The normal queues for check in, exit visa, security etc was as in every place we have been, a lesson in patience. We had time in Bogota for some pizza and it was good not to have just airplane food, although I must say I am quite impressed with the airlines here, I think I was expecting 2nd class and I would actually say they are more like the good old days before our carriers discovered low cost, low frills.
The taxi driver was waiting for us in Lima and had a very comfortable van for the 6 of us, Hans, Kuassi, Ronald, Cindy, Murali and I. It was a good 40 minutes to our hotel but it was not too bad, we arrived at 1.45am, Ronald and Cindy then went on to their different hotel where the conference was being held. However then we met with the worst check in experience so far. The girl behind the desk tried to check in all 4 of us together and it took over half an hour! At one stage I had to ask for a glass of water I was so tired and faint. Eventually I got in my bed a little after 02.30 and my presentation was at 9am.
When I woke up, I took in my room for the first time, it was a nice big room with a lovely Jacuzzi spa bath and lots of space, then I noticed an open door at the end of the room, as if it was a connecting door. I gingerly approached it as it was ajar, worried about what or more importantly who I would find on the other side. But what I discovered was a suite. Very nice.

We walked to the conference hotel which was about 15 minutes, past the Huaca Pucllana archaeological site, belonging to pre Inca Peruvians. The event was kicked off by Miguel Palacios from PEOUG and then Pablo who is working for OTN gave a quick presentation on OTN resources in Latin America, a very slick and clever demo, it is obvious he is in marketing. I was up next as the keynote in Lima and the audience were great with one exception. In a packed room a women in the front row, took 3 calls on her cell phone during my presentation and not only did she not care, no one else seemed to either.
I think this was the best organised event of the ones I have done so far and there was a great crowd. As I had gone so early I had a few free hours and Cindy and I went exploring. The area we were in was pretty high class with a lot of shops, The Rodeo Drive of Lima. After finally locating a post office for postcards we treated ourselves to manicures. Then we found a starbucks that had a valet parking!
Back at the conference in time for lunch, I was on afterwards. Throughout the conferences as I said in the previous post it has been difficult to get people to ask questions. I am also struggling in my 42 Real Life Examples as no one seems to have heard of Douglas Adams so I have a lot of scene setting to do at the start. Still they seemed to be interested and I got one question, about the white paper. I told the person to see me after to get a card from me so I could send her more information, and when I finished I had a queue so I think that is another lesson learnt.
That evening Miguel and Wendy took us to an International Buffett for dinner, you could have anything to eat. We were joined by Graham Wood, who is a long time friend and great to catch up with. 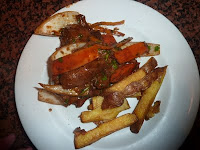 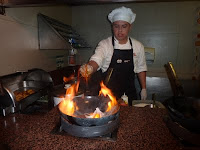 Apparently a delicacy in Peru is Crunchy Fried Guinea Pig or Cuy, which is served whole, no thank you. But I did try stir fried llama, and although a little gamey it was actually quite nice. It was a nice relaxed dinner were we all ate too much there was just too much to choose from.
Most people left early the next day, Ronald and Cindy were skipping Brazil to stay on and visit Machu Picchu, I am so jealous but just couldn’t afford the time. I had promised to do Brazil and Fujitsu have an office there and I wanted to meet my peers. Hans and Kuassi flew to Brazil. Graham and I had another day in Peru and wanted to look around. Murali was flying home later that evening so e joined us. 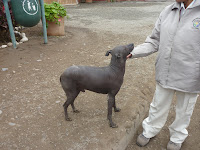 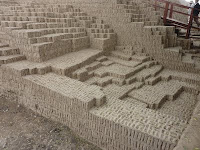 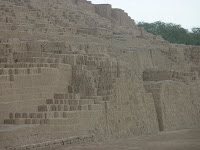 We started by visiting the archaeological dig which was great to see. These pyramids are solid and unlike the Egyptian ones which are for the dead, these are for death and used for human sacrifice. The structures look a bit like bricks but are upright in adobe style or like library books, this was to survive earthquakes. They also had on display llamas (I felt guilty then for having had one for dinner), guinea pigs (felt even better for having skipped these), and a Peruvian dog which is completely hairless, these are now an endangered species but apparently very good for people who have respiratory problems as no hair means no allergies. 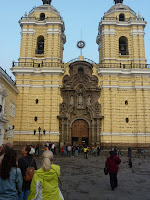 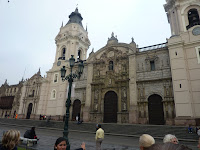 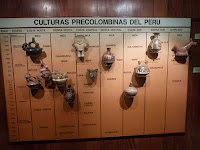 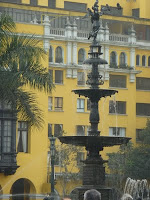 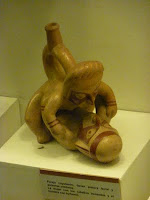 After the dig we took a city tour. Cindy and Ronald had done it the day before (his sessions finished early enough and they really recommended it. We did a little tour in the bus and then went to the main square where we alighted the bus and started walking. Our guide (another Cindy) took us around a museum and told us about the Peruvian history and showed us lots of artefacts. I just love the drinking vessels, even the more erotic. We then went for a bit more of a walk to the Franciscan Monastery where we visited the catacombs. These were in essence the public cemetery and when unearthed the skeletons of over 25,000 people were found. Today the bones have been sorted by bone type and size and I kept thinking my OCD cleaner had had something to do with that. 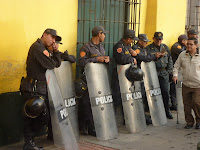 The tour finished at 6pm and then we were to be dropped off at our hotel. Murali needed to catch a 10pm flight, seemed ok but we hadn’t planned on the Lima traffic, not sure if it was to do with the civil unrest in the centre (we saw lots of riot police arriving as we were leaving – I felt at home, Belfast style). Anyway we didn’t get to our hotel to 7, but with a manic taxi driver he got there just in time.
Graham and I went to a local restaurant for dinner and again I avoided the Picante Cuy (we even saw it being sold on the street during the tour). Apparently it is served with head and legs looking up at you. But I did have my first Pisco Sour, my is that strong.
We left about 9.30 the next day, and the opposite experience of our fellow travellers, we had a simple drive out to the airport and simply flew through all the officialdom, thank you Star Alliance Gold program. We even had time for another Pisco Sour in the lounge before boarding. The flight was 4 ½ hours and I had my penance to pay. The guy in front of me was Peruvian Champion of the world in fidgeting, and despite asking him many, many times to sit still he continued his in-flight trampoline routine the entire time!
OTN photo album of Lima
Posted by Debra Lilley at 04:39

No. I was there for the next trip too. We went to International Buffet together.

Apologies Arup, everything has rolled into one :) i have amended the posting.