Next stop Sao Paulo; Graham Wood and I arrived in the evening, arrivals and immigration were simple (being non American we did not need visas), and our driver was waiting for us. The journey into the city was at dusk, and I was actually a little disappointed, so far my impressions of South America have been how different it is and yet Sao Paulo is very much like any city in the US; having said that, it was very impressive.

The next day, Saturday was the conference and we were all very impressed with the event. It was the biggest by far so far and very well organised. There was a speaker room which is so important when you are there for the whole day. 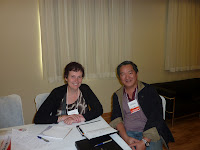 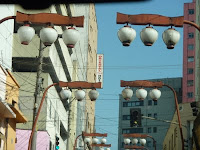 Regular readers of this blog know I work for Fujitsu, and they have an office in Sao Paulo, so I was really please that my colleague Armando Yoshicatsu Miyoshi was able to attend the conference and meet with me. It is so much easier to be part of a global team if you have physically met people. It was really good to understand the economics of Brazil which are so different from US and Europe; it is a rapidly expanding economy with a lot of investment. This is important for Fujitsu as Sao Paulo has the biggest Japanese population after Tokyo.

I had starting having issues with my laptop which kept freezing, and by Saturday (the day of the conference) I was not confident I would be able to do my presentations, so my friends Hans and then Kuassi helped out by letting me use their laptops as they were immediately after my presentations. Thank you friends.
My presentations went well and almost half the room knew what 42 meant, I thought they might as my friend Bruno Souza who runs the Brazil Java Usergroup has a blog call Life, The Universe and Everything Java. I had hoped to meet up with Bruno, but he had to be out of the city this weekend.
After the event which lasted 12 hours (very impressed that delegates give up 12 hours of their time on a Saturday), we had dinner with the board. It was a great evening and I thank Eduardo and his board for their hospitality. 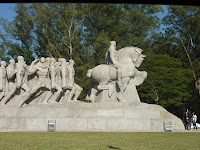 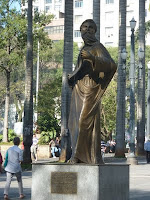 On Sunday the board had arranged a tour guide for Graham, Kuassi and I who were still in town, (the others had their tour Friday). We got a tour around town and some of the history explained, and a visit to the football museum which the boys really wanted to do. I was not so keen but actually really enjoyed it, they had a history section that showed photos and events of each world cup, put the football into context. There was also a kind of virtual pitch that we all had a go on. Cameras were not really allowed. We didn’t do very well at it and the only goal was an own one from me! 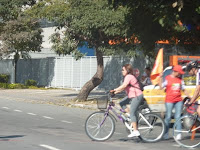 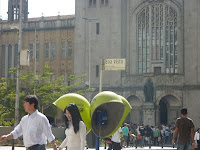 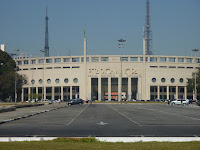 One thing I noticed was that every street corner had a phone box, and photographing anything without them in the shot was a challenge. What I did like though was that they have some great community initiatives such as cycle routes and lanes on Sundays where many people participate, and the main link road through the city is closed to traffic on Sundays and used by cyclists, skate boarders etc.
The entire time we have been in Latin America has been the COPA Americas competition, and Brazil was to play Paraguay that evening. Graham and I wanted to find a bar to watch, our hotel recommended one in the local mall, and we headed over having had lunch and saying goodbye to Kuassi and Arup who were leaving the tour from Brazil. We were actually surprised that for a sport loving nation such as Brazil the bars were empty. The actual match was not exciting; Brazil played better but just never scored. When it went to extra time we rushed back to the hotel and carried on in the bar. Always keen to try the local delicacies I had another Caipirinha. The game went to penalties and Brazil lost.