Oracle Fusion Applications and the NDA

A few weeks ago my very great friend Floyd Teter blogged about his participation in the Fusion Apps Validation program and what he found. At the time I questioned his definition of NDA (Non Disclosure Agreement) but he was happy he had not overstepped the mark, and to be far there has been a lot of positive comment to his posting.

I attended wave two of the validation and there was a lot of discussion around the NDA and blogging and different members of Oracle gave different interpretations. However I have been asked specifically by the track leader of the module I attended not to share anything about that in my blog, so for now I am not. I, and all others included are very fortunate to be part of this and as Oracle ACE Director for applications especially Fusion Apps I want to continue to be part of that trusted group.

The one thing I will say though is I had seen several demos of Fusion Apps before I took part in the validation and was really impressed by the User Experience. I would like to add to that and say that the user experience is not confined to the end user, it is equally true for the maintenance user.

I look forward to the day I can post more detail.
Posted by Debra Lilley at 10:04 No comments:

Good Things Come to Those Who Wait

My Product Development Committee (PDC) within the International Oracle Usergroups Community (IOUC) is where users groups work together for the benefit of all users.

Since Fusion Applications were first announced we have worked to ensure users are as educated as possible and have their say into the process. Oracle has been great here and I must thank them for their commitment to us throughout the process, but more about that in my next post. 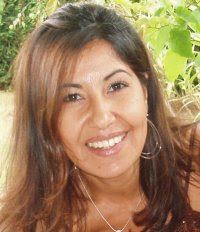 For the past few years Dr Nadia Bendjedou who works for Oracle in the EBS technology area, has been presenting her dynamic white paper The Evolutionary Path to Fusion to many users groups around the world. In fact the PDC are often seen in the front row of her presentations as dedicated groupies.

About 18 months ago we thought it would be a good idea to do a follow up on the paper, it is great to feel motivated by the presentation but when you get back to the office it is more difficult to explain to your colleagues or boss, why this is useful and how it my relate to your organisation. So we worked on a simple tool that might help.

I say simple but actually a lot of people in the PDC and especially Nadia put a lot of hours into how we should do this. We are based all oer the globe and the calls were very early morning for those in Australia and New Zealand and late at night for those of us in Europe, poor Nadia lives in Paris which meant we were finishing at 11pm for her.

But we finished the tool named 'Oracle Applications Planning Tool' and I showed it for the first time at Open World 2008 at the end of one of Nadia's presentations. This was the start of a great double act which we have taken around the world, and people see value in it.

Only problem was we had to get so many people in Oracle to check we weren't given mixed messages or confusing people before we could make the tool available and this has been a long struggle. I work for a big organisation and I know that makes for lot of hurdles when you want to do something out of the ordinary but I still found it very frustrating. The PDC itself is fueled by enthusiasm and passion and that was coming very close to being extinguished as we waited and waited to get this tool out to you.

BUT WE HAVE and it is now live.

Give it a try and then let us know on Oracle Mix what you think.

Thanks to Nadia, Cliff Godwin who has helped make this happen and to all the PDC who worked on getting this together. And thanks to Bambi Staveley in Oracle who put together the web page and made my many edits.
Posted by Debra Lilley at 07:45 No comments:

one small step for man; one giant leap for Debra 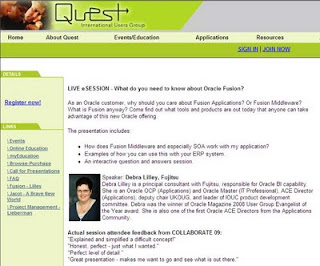 The Oracle ACE Program has a Fusion Middle Kit to enable people to demo FMW with Applications. And thanks to the patience this team has had I have been able to show from a business point of view how easy it is to use SOA with E Business Suite.

My area of interest is Fusion Applications and I have built up a presentation looking at Nadia Bendjedou's excellent white paper (more about this in the next blog), talking about the technology Fusion Applications are being built in and how it is available to use today with all Applications. I have given this presentation around the world and the feedback has been really good. In Australia my analogy for SOA was actually recorded and can be found on youtube

For Collaborate this year Quest asked me to give the presentations for a JDE and then a PeopleSoft audience. The FMW team helped me with the actual demo which is pre canned and despite being very nervous I actually enjoyed the sessions, the feedback on the day was excellent.

So when Quest contacted me and said they were giving on line sessions and were looking at those which scored highest at Collaborate I felt really honoured (and yes that is how we spell honoured in the UK).

"Explained and simplified a difficult concept!"

"Honest, perfect - just what I wanted."

"Great presentation - makes me want to go and see what is out there."


So I said yes, and yesterday I had my rehearsal, thanks Jesse from Quest I couldn't do this without you.

So if you want to hear about Fusion Apps, The technology and How easy it is for you to use it Today, or if you just want to listen to my English accent, sign up.

And I don't often talk about Fujitsu in my blog, but another high scoring presentation at Collaborate that will also be featured in this web cast series is a US colleague of mine Allen Jacot.
Posted by Debra Lilley at 07:05 No comments: