Fusion Applications As a Keynote

Great presentation from Steve Miranda on Fusion Apps. He talked about the technology behind it. Good timing as it is based on 11g Fusion MiddleWare which is launched next week.

The demos he gave were a subset of what has previously been shown at both Open World and Collaborate, but the difference here is, this was a keynote. Also he spent more time because of the audience on what was behind it, pointing out for instance that in the single GL Role home page you could access data from both OLTP and Essbase. He talked a lot about the possibilities WebCentre opens up for organisations using Fusion Apps. For me the smartest part is the seamless use of analytics information where you need it when. 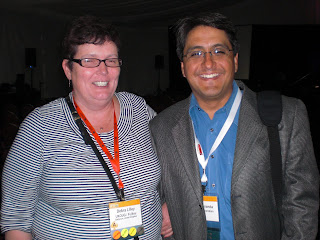 Many of these features shown are not in simply coded into Fusion Apps, what you have are 'place holders' or 'hooks' where Fusion Apps can consume any commercial or developed services, such as 'twitter feed' against an individual in HR, 'google maps' against any address. It will be interesting to see once people start adopting the Apps how and what these are used for.

What was great was the interest from the audience in seeing it for what I guess for most was the first time.Last Friday as the ACE Directors briefing, in a room full of very clever people, with great access to Oracle in their field of speciality, the question was asked, 'Do Fusion Apps really exist?', I was able to say yes and that Steve would talk about them Sunday. Ever since Steve spoke, I have talked to several fellow ACEs who specialised in some part of the technology and they were very impressed, but even more so they now have a way to relate the technology to Oracle Apps development.

So please Oracle, more of the same.
Posted by Debra Lilley at 21:36