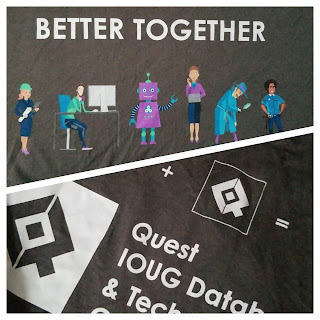 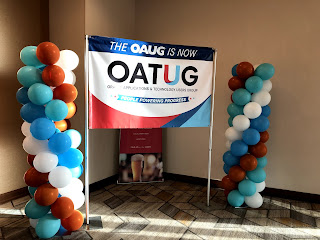 Posted by Debra Lilley at 00:38 No comments:


Collaborate for the first time in ages was not in Las Vegas which really pleases me although it is back there again next year.

This is the biggest user event in the calendar and I had 5 sessions, across the 3 uaergroups.

I was part of an OAUG Cloud Panel facilitated by Alyssa Johnson and it also included Mohan Iyer and Alfonso Pinan from City of Atlanta who had previously shared their story at OOW. This was a good session and showed the interest from users.


Later in the day I facilitated a panel session on Community, which was the idea of Jennifer Nicholson who runs the ACE Program. Also on the panel was Michelle Malcher, Karen Brownfield, Mia Urman and Opal Alapat. Everyone shared stories about how communities, especially the ACE program has helped their careers both privately and professionally. 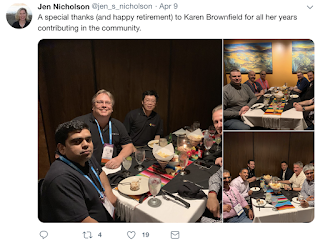 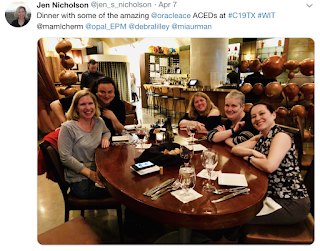 I spoke on 'Which Cloud Should I go to', this is my flowchart presentation based on the article in Oracle Scene. I am very passionate about this because I think Oracle have separate conversations with their customers and not a single strategy approach. I spoke to one customer who told me they had both their Apps Account Rep selling SaaS to them and their Tech Account Rep who wanted them to go IaaS, at Collaborate, entertaining them separately!

I also gave my presentation on VBCS, which in Ireland last week I realised is more just an example rather than this actual example. In Collaborate it was the last session of the day and no one turned up. This is the first time this has happened to me and I was very disappointed. I know the session time is part of it (other people had no shows as well), but I also think I need to change the extract to reflect its true objectives.


I also had an early session on Thursday, after the party Wednesday night, so I was worried it was going to be badly attended as well, but I shouldn't have worried it was a really big crowd. This was my Back to Basics session that talks about what is under the covers of Fusion. It may be true that you can't touch this but for those moving from on premise they do have an interest.

I also got the chance to catch a session from my great friend Floyd Teter who is part of the Oracle HCM CoE.


Networking was also fantastic, I had dinner with Jennifer, then the ACE Dinner, loved the big party although bowed out early and finished the week with a great night with Sue and Michelle with dinner on the River Walk after a bus tour of the city.

Despite it being Las Vegas I look forward to next year.

This was an in and out conference for me.

It’s a two day event and this year it was the 15th Irish User Event and I have attended everyone. I even remember the board meeting when regional events were first suggested and I offered to champion this, my local event. I led it for many years and am still a volunteer under the leadership of Simon Holt. 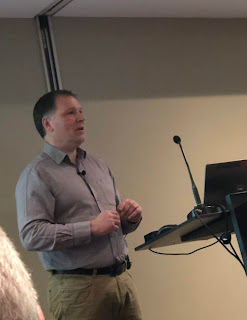 I was there the night before and had an opportunity to have dinner with Alex Nuijten and to celebrate the recent promotion to ACE Director for Patrick Barel. Leaving early meant I couldn't be ring-girl for the 2nd bout between Alex and Chris Saxon, but Maria Colgan helped out, I'll be back again for the next one at Kscope in June.

I had two presentations, Chatbots and Extending SaaS with VBCS. Both had a good audience and lots of questions. The VBCS was the first time I had given this specific example and the conversation was more about the principle in general rather than this use case.

I managed to chat with Maria Colgan and then Tim Hall, and have a look around the very impressive exhibition hall. I hope to be back next year.

And as for the awards, Accenture won Cloud Implementer or the Year. 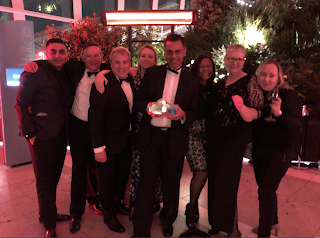 Posted by Debra Lilley at 23:00 No comments: