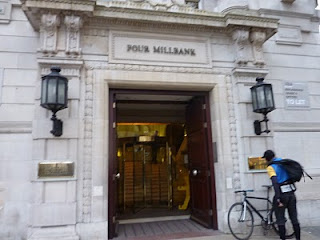 The Responsibility of Position 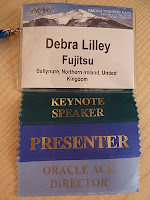 In my last post I mentioned the ACE Keynote Panel at RMOUG. I was very honoured to be part of this and wore my conference ribbons with pride. The idea of the keynote was to give people the opportunity to understand the ACE program, here what we were thinking and ask us questions. 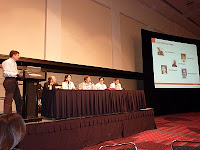 The panel was moderated by Duncan Mills who had us introduce ourselves, and then Dan Morgan gave a little overview on the program itself. If you look closely you can see our mascot Stanley on the table. One of the things Dan talked about was how Oracle listen to the ACEs and how our feedback is taken very seriously. 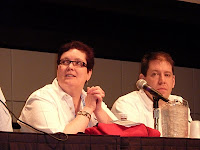 Duncan asked us what we expected to happen in the Oracle World in the next 12 months. When he got to me, he laughed 'We all know what you are looking forward to', well yes 2010 is the year of Fusion Apps (please don't let me down Larry), but I decided I wanted to respond with something else and use my position as an ACE Director to talk about something more immediate.

So what I said was 'much sooner than over the next 12 months I want to see a big improvement in My Oracle Support'. Why did I say this? Not for the shock factor but because I mean it.

The introduction of My Oracle Support was a communications fiasco and there were too many teething issues. Threads such as "My Oracle Support" a non-starter in OTN Forum and just google 'My Oracle Support problems'. Dan Fink did an excellent survey and included the good and the bad comments.

We expect teething problems with new software but this was last November and I still hear people moaning today, is it as bad or are they just turned off so badly they have been tainted for ever? What I would like is frequent updates as to how it is going and an apology.

Why I am mentioning this again? Well I am waiting for Fusion Apps, I know so much has gone into testing it and I have said so much about the product you know I can't wait. But as a customer who has had a really bad time with My Oracle Support would I trust a much bigger software rollout? It is about Oracle's reputation and their customers' confidence in them. At the SUN launch Oracle said they would move their support as soon as possible to My Oracle Support, please don't do it till you are certain it will be seamless.

In my role I don't actually use My Oracle Support much and when I do have an issue I have to admit I try google first. However my first role in Fujitsu was running our Oracle Support offering and at one point I had two ladies work for me who spent the whole day phoning Oracle Support, in those days it was by country and they were on the phone to Oracle in Bracknell all day. When they got to 'You are next in the queue' they passed the phone to an Oracle resource. We wouldn't accept that today would we? I famously once sent a Christmas card to the 'lady on the phone' at Oracle UK as I listened to her more than anyone else in the whole organisation. Anyone else remember those days? Oracle support has come a long way.

Oracle listens to those of us in the ACE program, and with that comes responsibility to speak out.
Posted by Debra Lilley at 13:18 6 comments: