Show Me the Way (Well one way) to The Cloud (applications)


I had best start this post with a clarification, the way to Cloud Applications previously known as Fusion, a clarification I have a whole post about.

Oracle have been pushing the Cloud Applications for several years, and whilst they have sold well, the shift to E Business Suite customers moving their applications to the cloud applictaions has now well and truely gathered momentum with many deals I see today this scenario.

Oracle sell the applications as a solution as they should, but if you have EBS today, if you are currently supporting EBS you are also interested in how you get there?

My next speaking opportunity is the UKOUG event Applications: Journey to Cloud event on 8th March and hopefully there is something in the agenda for everyone.

But before the UKOUG event Oracle have their Modern Business Experience event this week. I love this event plenty of customers talking and thought leaders sharing their wisdom. This event is about the WHY you should consider the solutions Oracle offer and the difference they can make to your organisation. 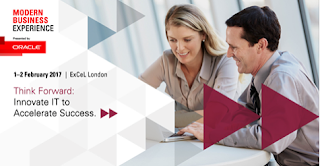 The UKOUG event just 4 weeks later will show you the HOW; presentations from people who have made the move and what it meant to the support teams.

The Office of National Statistics is a well publicised Certus customer and their sessions at the MBX will talk about the drivers for and advantages gained by their move to Cloud ERP and HCM, and then at the UKOUG event they will be back talking about how their support team have taken to their new system and the opportunities it has given them.

I have a couple of presentations, one about how to approach your EBS to Cloud project and another on PaaS4SaaS which cold be how you take those customisations to Cloud.

Look at both agendas, so much being covered from two different angles, something for you all.

Posted by Debra Lilley at 19:35 No comments:


I have a confession to make, I am using the word "F" word again.

I was one of the first to insist we stop using the word 'Fusion' when Oracle stopped calling their Cloud apps Fusion. In fact at many meetings I instigated a fine for anyone using the word; money collected to pay for the coffees.

Within Oracle I still heard it though and that was frustrating, the worst offenders were Oracle support. The Cloud applications team in Oracle Support are called FAST, not as I first suspected a reference to their speed, but an acronym for Fusion Applications Support Team.

I thought it was getting through to most people, I heard it less and less. Within UKOUG we were very careful to talk about cloud applications and in my own organisation it was changed wherever possible. I started all my presentations with a simple slide:

Then mid 2016 all the confusion returned, as the term Cloud Applications has again morphed. I found myself having to say 'the applications previously known as Fusion' to make sure there was no confusion!

Oracle announced their strategy to encourage all on premise applications users, E Business Suite, PeopleSoft, JD Edwards etc to take their installations and run them on IaaS, Oracle Managed Cloud Service. I am not against this strategy, although I wish it was portrayed more as an option rather than the next step, in fact prior to Oracle releasing an IaaS offering for apps, many of their customers had successfully migrated their applications to run on other third party IaaS offerings.

What I am frustrated by is that I have to spell out in every conversation what I am referring to. I raised a call with Oracle about a Cloud Apps problem and the support analyst kept asking me what version of EBS I was on. I was blinkered and couldn't understand why he couldn't accept of I was using cloud apps and ended up being quite confrontational, so much so he got his supervisor to ring me. I said why couldn't the analyst understand I wasn't using EBS when I kept saying I was using Cloud Apps. He promptly gave me a lecture on the ability to run EBS on IaaS and that that was what they called Cloud Apps.

Then last week I contacted a partner who had an EBS technical solution and asked if they had a Cloud offering or plans for one, and this was their response:

If the customer is just hosted by Oracle OMCS or another hosting provider, we can perform the project as per usual.  It just involves additional steps with the hosting provider.  If you are asking about using our software on the Oracle Cloud (Fusion) product, that would not work due to the database access required for our “magic” to happen.   Please clarify the implementation

I had stumbled over the same obstacle.

So if you hear me use the "F" word, don't condone me, it's all in the name of clarity.