My journey was long but quite uneventful, London to Miami and then onto Quito. I fly a lot but this trip is a One World journey and I have no status with them, and did find myself queuing a lot which made me appreciate my Star Alliance Status rather a lot.
I have never been to South America before and was not sure what to expect. Many of my fellow tour stars were here last year so I think were better prepared.
Quito lies on the equator, and was neither hot nor cold, in fact a very nice temperature. The buildings surprised me, there were just so many. When looking up at the hills on all sides from my hotel there looked to be simply millions. And those hills, so so steep.
I got a hotel shuttle from the airport and the first thing I noticed was how people drove. I have heard the sayings ‘as long as the horn works you are ok’ and that was defiantly their mantra. 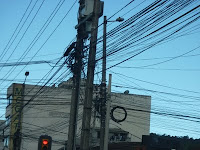 On the streets electricity supply just seemed to be wires on what appeared to be quite low poles, I guess there are not many high vehicles. In fact apart from taxis and what appeared to be excellent bus service there were few private vehicles. The streets were though very busy, with road sellers, yes in the road not on the sidewalk, sellers who sold everything. At one place I saw many vehicles turn up with furniture and a market suddenly start up in the road!!
Our hosts were Paola Pullas and Christian Pazmiño from ECUOUG and the event was held in the Universidad de las Américas where we were made to feel very welcome. This was the first time I had presented via simultaneous translation and you unconsciously slow down so I had to skip some of the content but I had questions so it seems to have gone down well. It was probably just as well as my sore throat came with me from the UK and I was quite worried I might not even have a voice, I was a bit croaky but it was fine. 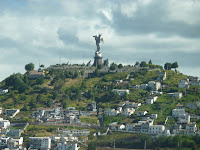 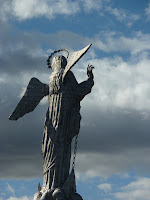 Ronald Bradford showed me a picture he had taken at the equator and I so wanted to visit, although I know I had already physically crossed it travelling. We asked if I could go straight after the event, but the park where the sign is located shut at 6pm. then after a while I realised I would finish my 2nd presentation and have 3 hours before the meet the experts panel session, so Paulo and Christian arranged with Mr Gracia, a local taxi driver to take me out there, or so I thought. He charged $8 an hour which is fantastic, and he started by taking me to the city and showing me a few of the sites, the most impressive being the Quito Angel and the view of the city from San Francisco Park. 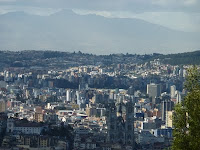 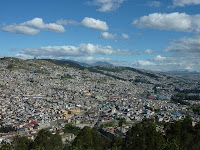 We kept seeing sign posts for ‘Mitad del Mundo’ so I was convinced we were going, he took a few side roads which I thought just meant a short cut and then 45 minutes early he dropped me back at the university. I was disappointed I didn’t see the monument although it is actually not on the official equator line, but I did see a lot of Quito which I wouldn’t have seen without Mr Garcia, and I was able to buy a T shirt in the airport the next day (or should I say night, we left our hotel at 4am). 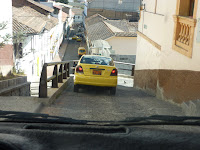 Those hills I mentioned, in a taxi they are quite scary, but in my next posting I can tell you about something more scary!
My speaking companions on this leg are Ronald Bradford (with his wife Cindy), Kussai Mensah (Oracle), Hans Forbrich, Murali Vallath and Tom Kyte (with his daughter Megan). We also have Pablo Ciccarello from OTN Latin America travelling with us. After the conference we had a quiet night in the hotel. (because of the early start the next day).
Think I am going to like this tour :-)   OTN Photo Album of Quito
Posted by Debra Lilley at 23:31