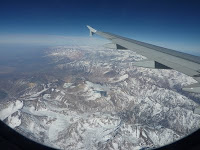 I had to hold my breath as the flight approached Chile, we flew over the Andes and the view was unbelievable. The sun shone and our flight was quiet enough that Graham, Kai and I had a row each and the best views ever. This was the #1 highlight of the whole tour experience.
The shuttle Graham had arranged turned out not to be, but we soon had that sorted and speed towards the city. We stayed in the Marriott and I asked firmly but nicely for a mountain view and they came up trumps. 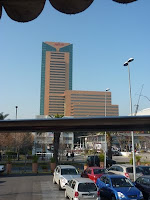 We arrived early afternoon and quickly went back out to take a bus tour of the city. It was very interesting, more modern than most of the cities we had been to, but still had its old world and traditional charm. 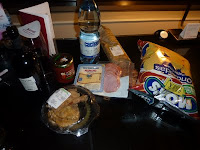 After two weeks on the road, and another time change, the 3 of us decided we didn’t want another restaurant meal, so when the bus dropped us back we went to a supermarket, bought bread, cheese, ham and of course Chilean wine and had a picnic in my room with the intent of watching the sunset; except in Chile sunset and sunrise lasts approximately 1 minute, like a switch being thrown. It was great to have a relaxed evening and an early night. 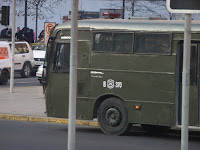 Hans arrived later that evening and we caught up with him at breakfast. The user group event was held in a nearby private university, which is important as there were protests at the public universities about the introduction of fees, we had seen riot police in the city during our tour. The university was beautiful and we saw most of it as we were led through a rabbit warren of stairs up and down by our host Filipe, we finally ended up just 50 metres from were we started; poor Graham had dragged all his luggage around. 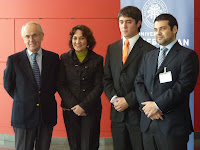 The day was good; we were met by the Dean of Engineering from the University, who wants to make the university the home of the user group. His top student Ricardo Pérez was presented with a bursary from Oracle to enable him to complete all the OCP exams. The facilities were great and although the audience wasn’t the biggest they were very attentive.
We had lunch close by in a very traditional Chilean restaurant and a quick chance to see a local market before the afternoon sessions. Graham left to go home after his session and Hans, Kai and I went back to the hotel. We wandered around the fantastic shopping centre for a while but had a quick McDonalds before another early night.

I finally managed an early morning swim the next day before meeting with Kai and Hans at breakfast, time to say my last goodbye as they were leaving. I had one more day, Chile is were Francisco who organised the whole tour is from, and I wanted him to show me the city. Unfortunately for personal reasons he had had to pull out of the tour, but I found a tour to Valporise and Vina del Mar, which was a great day out. Valporise is a UNESCO heritage town, built literally into the hills all 41 or 42 of them (depends who you ask), and many escalators (funicular railways). We did a lot of walking, and came down to the harbour on an escalator I am sure has not had a safety inspection in years.

Then we went to Vina del Mar and had lunch by the ocean, and I had the chance to try a Chilean Pisco Sour. They believe they came up with it, just like the Peruvians do. Which was best? Not sure would need to do more research. All too soon it was time to go back to Santiago; another walk around the shopping centres which was full of outdoor restaurants and live music on a Saturday night. Then I had to pack for my long journey home the next day. 13 hours to Madrid, 5 hours wait till my flight to London and another 5 hours before my flight to Belfast; but a small price to pay for the most wonderful experience.
Posted by Debra Lilley at 12:42