Back to the Tour - Montevideo, Uruguay

The journey to the airport seemed so long and we were late leaving as the driver had to pick up Pablo first, and so I nodded off in the taxi, but that could be more to do with falling asleep at 7pm after the football (or rather the drinking), and then waking up at 11pm and working for 3 hours before trying to go back to sleep.
At the airport our airline Pluna appeared to be a no frills Easyjet equivalent, if you wanted to get on the bus first there was a charge of $4. I have to say Brazil was the most expensive country so far. My daughter has a large collection of havaianas flipflops which are made in Brazil and yet they cost $16 a pair there, scandalous.
On board the aircraft I paid $8 for the worst sandwich in history, it was advertised as salami but honest it was the pits, with more stringy, spongy, wet gherkin than any meat.
However Montevideo was a real surprise, the airport is very modern and beautiful to see. A taxi driver was waiting to collect us and when they saw our luggage decided that we didn’t need the van that was booked we could fit in a taxi so gave us money to give back to our hosts. A very welcome surprise. The hotel too was very nice, a Tryp Hotel which we had also stayed in whilst in Brazil, but a much nicer hotel.

Our hosts (L-R) Pablo, Nelson, Edelweiss, Bruno and Daniel were fantastic, nothing was too much trouble for them, and they certainly went out of their way to make us feel so welcome.
The first night we went out to dinner to a very small restaurant where we had our own room, and for one stop only we were joined by Patanjali from the UX team. We have often spoken together and our content overlaps so we had to have a quick check we were not doing so in Montevideo.

The conference was in their telecom tower and if was a very impressive auditorium. One thing that has struck me throughout the tour is the length of the days, this one started at 8.30 and went through to 8.30pm, which is good as Uruguay were playing in the semi finals of the COPA cup that night. Cindy went out to buy football shirts and we ate that night in a Pizza House and the atmosphere was what we were hoping for in Sao Paulo and even better because Uruguay won. So Sunday I will wear my shirt again even in Chile for the final.
The event was very well organised and a good crowd attended, I had a number of EBS questions and there was an interest in accelerators which I only mentioned once; but being asked questions is the real value of presenting, when people get the information they need. 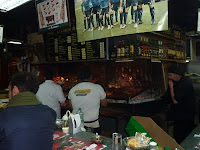 We ate a local dish of Chivito which is referred to in guide books as a Heart Attack on a Plate, and yes it looks like it. One of our hosts Bruno is a national Tango dancer and has to eat a lot, and he did. This picture is from a traditional BBQ the last day, and I think he ate more than the other 11 of us put together.
Montevideo sits on the coast, although not really as it is actually a river not an ocean that separates Uruguay from Argentina. But the coast line is stunning and this is a must, must go again place. The only down side is that it was winter and with the wind, freezing, I had to go buy warm clothes.
Our hosts also showed us around the city and invited us back to their home, it was wonderful, very relaxed and a really welcome change from another restaurant, although to be fair, at lunchtime we went to a traditional BBQ house which I loved. 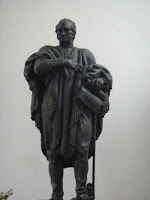 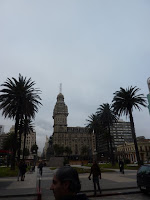 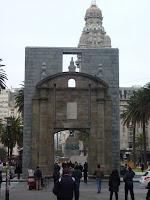 Then this morning it was time to say goodbye to Cindy and Ronald who are leaving the tour but travelling home via Argentina. Graham, Kai and I flew out together and Hans joins later today. Chile is our last stop on this tour.