I have spoken before of where I have found gamification to drive behaviours not originally intended, or where the things measured are not really what matters, but the Kscope gamification this year was excellent.

The AppsLab part of the UX Team in Development, created their Scavenger Hunt for Kscope. The idea was to show use cases for IoT, and they used a number of methods to give points whilst driving positive behaviour at the conference. Taking part in off-piste activities, attending keynotes, submitting feedback, being part of the community.

People really loved it, the numbers at Chi Gung went up, people at least looked at doing other things and I even attended an APEX session!

I signed up early, and for about 5 minutes was top of the list, but there was 50 points for solving a rubix cube and that is far too technical for me!

Jeremy Ashley who leads UX and Noel Portugal from Apps Lab had a session where they talked about how they had built the app, and what they have learnt.

I think I helped there, Noel said 'If I could use it, anyone could' which is a bit like Cary Millsap once saying he thought of me as 'the lowest common denominator' but they are probably right.

Anyway I had a number of issues, the app needed you to tweet. You could tweet from within the app and it wouldn't work for me, nothing appeared in my twitter stream. So I tried using the app I normally use, Hootsuite and every time I tweeted a photo I got a message from the team saying:

After a fair bit of detective work we discovered that the problem with Hootsuite is it doesn't show a photo, it creates a link, it needs to be either the app itself or from Twitter.

The original problem, wasn't a problem, I assumed that because I registered as @debralilley, then that is where my tweets would originate from; no; it took my twitter app configuration and used that. If I had a single identity, that would be ok, but I use Twitter on my smartphone for work as @certuscloud, so I had been tweeting, but as them. Luckily this happened over night in the UK and I was able to delete them.

This was two things not developed for, normally the UX team would validate their work with user labs, as they do for cloud apps, but they were up against time here. Guess I was the onsite validator, and they will be fixed for the next iteration, which I hope will be UKOUG 2015 in December.

To see the winners are read about what went into it, read their own blog.

Oh and I think I finished 9th (scores no longer online) based on this tweet: 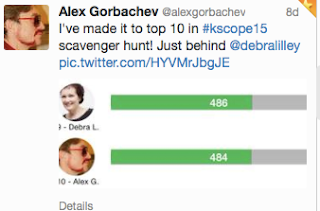