A few weeks ago, when posting I was going to Sangam I talked about my Yathra trip which whilst I loved the conferences, I hated the travel!

I have always been a nervous passenger on roads. In fact I am a real pathetic person, who used to hide behind the sofa when Dr Who was on, and have never come out from there. I can’t watch horror or sci-fi films and even dramas I close my eyes at, when violence happens.

As a car passenger I am getting worse and if you don’t believe me, ask my daughter or poor Andy Haack who drove me to SAOUG in South Africa.
So, India, well known for its traffic problems is a very big worry for me and going to Sangam was fulfilling a commitment I had made to Sai Penumuru several years before.

I kept telling everyone I was only going for 72 hours but actually I spent 48 hours In India, 42 at the conference (obviously) and 24 in the air!

The flight over was Hell. I have had many bad flights but this one was bidding for a place in the bottom 10. Probably it wasn’t helped by the fact I have been really busy recently, travelling for work, making the cultural move into Accenture and working on some high-profile initiatives for them which are both exciting and challenging.

I try to fly British Airways or at least One World as status matters to me. I rarely turn left on a plane but as long as I get an aisle seat on the left of the plane, I am usually OK. It is how I am treated that matters to me. Lounge access and even more importantly how problems are resolved.

Anyone who travels BA will tell you, they aren’t how they used to be. Top status is still great but it is very difficult to achieve by sitting in the back. I fly every week to London and that earns me between 5-10 points each way. To achieve top status you need 1500 points, and this year, somewhere between Open World and home I reached Gold for the first time in years. Armed with my shiny new card I expected this to be a good experience.

If the upgrade to Premium Economy is not too astronomical, I do sometimes, like for South Africa, treat myself. The ACE program pays only economy and that is fair, they have a finite budget and it makes it go further. However, for this journey it was not even available on the trip out.

The flight started to board on time, however there were 45! Wheelchair passengers, plus many elderly and many families with young children, who boarded early. A good 50% of economy. My status allowed me Group 1 boarding and yet space was already at a premium!
Many airlines limit the number of wheelchair passengers as how do you deal with that many in an emergency?

TECHNICALLY young children is those under two, although either these children were very big for their age or there was some other unadvertised definition on this flight. The idea is it gives them more time to settle the children into their seats. 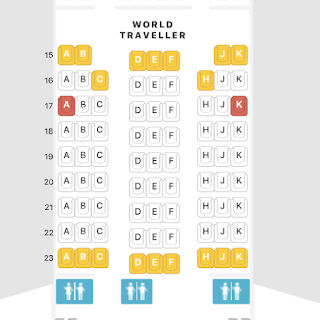 I had selected 16B, a seat which had no seat in front and I knew it would be likely to attract those who walk past without caring who they knock with their backpack, but this flight proved everything Oracle-Base says about fellow passengers right, and more!

The guy in the window seat of my row, used the arm of my seat to rest his bag on whilst he took items out, whilst I was sat there, then he climbed over me and the central seat passenger again without saying anything. He also suffered from bouncy leg syndrome and a worse bladder than me. Each time he got up for the bathroom he again simply clambered over us. On the third time, I asked him if he could speak, and he was surprised at the question. Once he confirmed he wasn’t mute I asked him to consider using ‘please or excuse me’ next time. He didn’t listen but was a little more careful from then on.

Once we were all boarded and the overhead lockers eventually closed, despite being at beyond full capacity we were ready to go, but not quite, the captain announce that a passenger was unable to ‘travel today’ and their luggage would need offloading. Not sure if that was a visa or medical issue but it caused a two-hour delay. 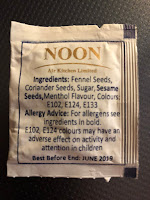 Did I mention the very many children on my flight? Well sitting still for 2 hours when we haven’t even taken off does not help the situation. This plus an 11-hour flight meant that many were suffering with complete boredom. About 2 hours into the flight, we were served dinner. And on the tray BA had kindly included a little sachet of human nightmare. Advertised as a mouthwash, a small sachet that carried the warning that the contents, artificial colours’, may affect the behaviours and attention of children.

WHAT WERE THEY THINKING!!!

The meal itself was OK, but I am not sure about the choice. I have posted before on the ‘chicken or pasta’ choice', it could mean anything, but on this route the choice was simply ‘Vegetarian or non-vegetarian’.

The journey was made bearable by the gentleman next to me who was a PHD student in the US going home to surprise his mother. He is researching network security and was really interesting to talk to. Thankyou Michelle Malcher for equipping me with enough buzz words to be able to get beyond the first line if his story. 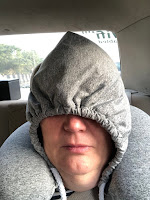 Finally, we landed, and I must say the hotel representative that met me was excellent. I was worried that being late meant we would hit the main rush hour, which is why I had selected a flight that was due to land at 5am. The driver told me it would still be OK, and I got into the back of the car. In my mind, I was going to use my travel cushion and sleep for the 90-120-minute journey, but before we left the airport, the car horns I had erased from my memory ensured sleep was not an option. Nor too was looking at the road, watching the lorries get too close and then a motorbike going between you and those too close vehicles. Tuk Tuks meander at a brisk pace and fill me with horror, so I pulled down the hood of my cushion and braced myself for the journey.

I had no intent of leaving the hotel, and when Connor McDonald told me it took over 30 minutes for him to cross the road, I was so glad our speakers’ dinner was on site. Connor also had to came home by Tuk Tuk as he couldn't get a taxi after his dinner outside. 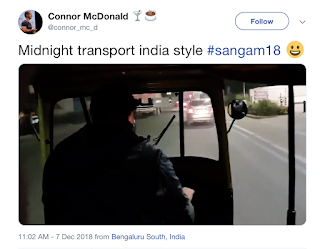 However, after the event Patrick Jolliffe persuaded us to go to a local biryani restaurant not far from the hotel. 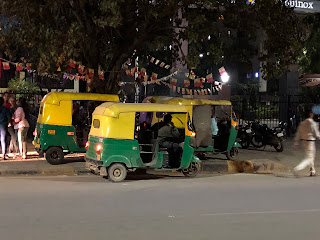 The walk was OK, lots of traffic noise but I didn’t look at that too much as eyes on the pavement was more important, with many family sized holes in the short distance. We did have to cross the road but with Luis Weir my friendly Venezuelan and Patrick to help me, I survived. The food was lovely, and I felt very pleased I had been persuaded to venture outside and experience just a little bit of life beyond the hotel where not only I stayed but the conference was held. 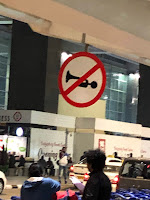 My flight home was at 7am, which meant a 3.30am start to the airport. It was quieter and to be honest my driver never used his horn until we got to the airport, which is ironic as they are banned there!

Then the flight home was the complete opposite. I was sat at the bulk head, next to a lady with a young baby and a steward asked me if I would like to move so she could have some more room. The flight wasn’t full and in fact they had a row of 3 seats by the door with lots of leg room. Although you can’t lie across them, I could spread out and was able to sleep or work whenever I wanted.

Also, on this trip the pursuer came to me and welcomed me as a gold member, treated me really well and made me feel valued.

That should be the end of the tale, the travel got better the longer the trip lasted but I was also humbled by a delegate who when I was telling him of my fear shared his wisdom with me.

When we are frightened, we have two choices, embrace it or avoid it, and I was taking the wrong choice.

Wise, wise words. Not sure how I will make a change but it is now top of my 2019 objectives.