Obviously, my own sessions were on Fusion Cloud.

Monday I talked about Extending with PaaS, I had a really good audience and I was very happy. My second session was on Wednesday and was chatbots so I expected a good turnout for that. However I think 9am on Wednesday, after the party Tuesday and the only session before coffee, meant it was a bit disappointing. However, Grant Ronald the chatbot PM who helped me with the technology back in the spring, attended this talk for the first time and said he really liked it. That meant a lot.

I must have PaaS on the brain as I managed to tweet
about my sessions with a pun in the event hashtag!

I also did a Q&A with Fiona Martin (KPMG) and John Aldwinckle (Oracle), for those thinking about Fusion. This was a good session with lots of questions. Stuart Entwistle held a similar session on Wednesday for those in the Cloud; what did they want from UKOUG?

Whilst I love to present, we all love customer stories and I was so glad to see Sarah Wormwell from Standard Life win a Speakers Award for her story last year. 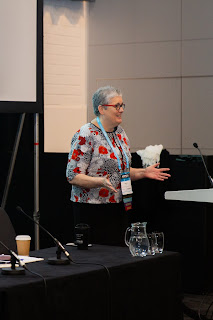 Kevin Osborne who is from Office for National Statistics, a project I was part of the implementation, spoke about Life in the Cloud two years in, and it was such an engaging story. Kevin and his team have been through a steep learning curve but are so enthusiastic about their use of Fusion.

Outside of sessions, I loved the talk by John McCarthy on his time as a hostage, 1,943 days. He hardly took a breath and had so much more to share, he was amazing. I had heard him before on a documentary, remember the events of his freedom well and have heard his fellow captor Brian Keenan speak in Belfast, so could relate to their story as an observer. Most important to me was that he made a point he bears no ill-will to Muslims.

I loved the event and hope you did too.