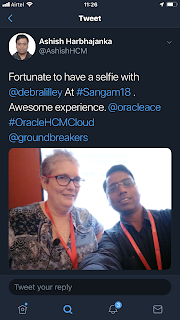 At the Oracle ACE session at #Sangam18, all ACE speakers were asked what they thought the program meant to them. I talked about the part of our role that is to encourage local speakers. I shared the story that when I first went to South America on an ACE tour the events were small with few local speakers, that is now defiantly not true and they have many ACEs including Directors, they just needed encouragement.

I try hard to listen to at least some local speakers when they are in english. It is so easy at a conference to just spend time with the other overseas speakers, these are your friends and the only time you may see them, but that could add to the sometimes elitist challenge aimed against ACEs, and it doesn’t deliver on encouraging.

There is an ACE in Bangalore. Ashish Harbhajanka, a Fusion Solution Architect, who has been active on blogging via ‘Apps2Fusion’ for many years and has written SIX books on HCM. We follow each other, and it was so lovely to hear him say he found me inspirational.

He was given his ACE last year in recognition to his community contribution but had never spoken at an event! You might be shocked by that, but the amazing Tim Hall, Oracle-Base, made it to ACE Director without ever having spoken, the content he delivered through his website was so powerful.

I remember trying to get Tim to UKOUG and the first time he cancelled saying he was ill. At the time I thought it was simply an excuse but now I know him better he may well of been, but speaking for the first time is daunting, especially if you have a reputation to live up to. 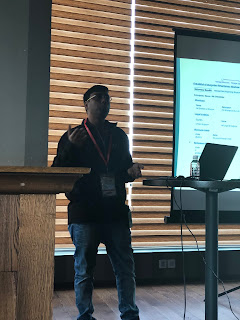 Anyway, Ashish was to give his first presentation at #Sangam18, and asked me so politely if I would consider attending. Why not? His area is Fusion HCM, and he wants to share that knowledge. He asked me for advice and I said he knew his stuff and had no problem talking to a blank sheet when writing his books. I told him to pretend the audience is the same, people who need to be moved from an empty page to one full of knowledge.

At the session he was obviously nervous, he forgot to put his PowerPoint into show mode, but once the audience corrected him, he was engaged. He spoke very fast but again that gave him time for questions, this is still a topic that has many unanswered questions and many in the audience have yet to work with the product.

He was great and I am sure it was the first of many sessions he will deliver for AIOUG.

Anish is not just a fellow ACE Program member, he is a colleague, he is one of 400,000 employees worldwide in Accenture. Now work for Accenture and they have a big presence in India. Unfortunately, because I could only stay for 2 days, I had no opportunity to visit the office, which I regret but hopefully next time.

I wish Ashish all the luck in his speaking career and hope to hear him speak again sometime.