I knew I was staying on after OOW and originally asked my  friend Maria Colgan if I could stay with her, then I thought perhaps I should try and arrange some diving. I was with Maria at Kscope and we were talking about it and I said I was considering trying to find somewhere to dive. She asked where and I said perhaps Hawaii, San Fran is the closest you will get to there. Now Maria doesn’t dive, but her immediate reaction was to come with me, and within 24 hours we had it booked. 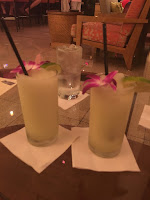 We left tea time on the last day of OOW, arriving early evening in our hotel in Waikiki, Honolulu, (at this point I must say the vacation was sponsored by United, Hilton and Marriott Frequent Traveller programs).  We sat in the bar, had a snack and the first of our cocktails and listened to the local music.

Friday we visited Pearl Harbor, which was an incredible privilege to see where so many people died for their country and how it is tastefully remembered. As we celebrate both Veterans Day and Remembrance Day on both sides of the Atlantic, this along with the Manilla Military Cemetery I visited a few years back will be what I think about. Pearl Harbor marks the beginning of the War for the US, and the surrender of Japan on board the USS Missouri, which is also now at Pearl Harbor, marks the end. 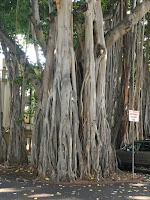 We spent the whole day there and really felt both moved and educated by history. On the way back to the hotel we had a mini tour of the city included the courts of justice famous from Hawaii Five-0 and I was amazed by the Indian Banyan trees that grow all over Hawaii.

Saturday we took a short flight to Kona, the Big Island, checked in early to our hotel and then boarded a boat for our Manta Ray Experience. This was my ‘have to do’ event for Hawaii, I love to dive and rays are my favourite. Maria doesn’t dive but the experience is just as good for snorkelers. When you sign up you know a sighting isn’t guaranteed, but when we got on the boat the dive guide told us they hadn’t seen anything for 4 days and as it was a full moon, the sea was quite choppy (the moon affects tides). 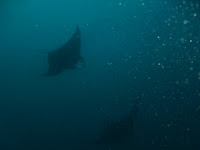 The first dive was late afternoon and the 4 divers, went down to a cleaning station and we were rewarded by seeing first one, and then a pair of mantas, over head and a few metres away, but very clearly mantas, and I was so happy, the dive had been successful. 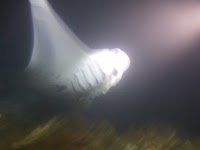 Back on board the snorkelers of which there were 7 had had less luck and the boat was very choppy. The provided food but many were unable to eat, and then it was time to return to the water as it quickly got dark. We knew there were Mantas in the water, there were only 2 other boats out which is unusual but it was Halloween and most people were out partying and many visitors are Saturday to Saturday. This was brilliant for us and everyone got to see the show put on by the Mantas, snorkelers and divers. The 4 of us sat on the sea floor, well as much as we could, there was a strong current and the mantas are so big and come so close they create their own currents. I can’t describe how amazing it was. Taking photos was too difficult they are so big and so close but I have some great video once I have edited it. 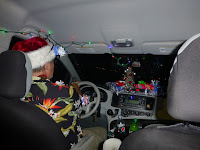 All too soon it was over and we returned back to the Marina, where Maria and I learnt that not taking a smart phone is not a good idea when your taxi is late and there is no light or anyway to contact them. Luckily for us a random guy drove past, we flagged him down and he lent us his phone. Apparently town was heaving for halloween and our taxi driver who arrived dressed as santa (the ghost of christmas present) was delayed. After a long shower we headed over to the most non irish bar ever to have the name, and a very late dinner and cocktails.

The only sad thing about Kona was I wanted to visit the volcano but after diving you have to wait 24 hours to go that high and we didn’t have time. Apparently there is no flowing lava currently so little to actually see but still I would have enjoyed it, I love geology. Sunday we had a leisurely breakfast and then wandered around the little area we were staying at Kailua Pier, Kona, we saw a pretty church and I would love to have stayed but we had to check out, although they had a history lesson after the service we said we would return for. We did a little sift shopping and not in the ABC Store, which Hawaii has so many off! Then we looked at a photography gallery which was amazing and so tempting. After checking out we returned to the church and the service was overrunning so I had the chance to take communion which was lovely, and then we got the church and missionary history lesson which was fascinating, well worth the visit I promise you.

Quick flight back to Waikiki where as the most decadent travellers I know we still had our room at the Hilton! Only because Hilton give you 5 nights for the price of 4 on points so it didn’t cost anything. Then off to another bar for food and cocktails. 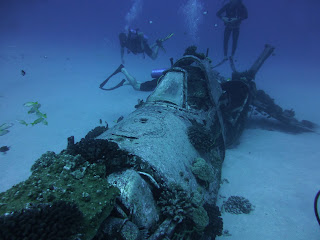 Monday I was up early for another dive trip, this time to a corsair wreck in the clearest water I have ever dived in. 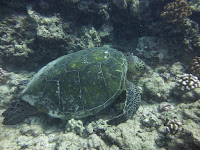 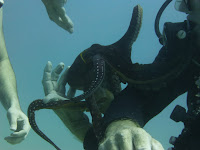 The dive crew were excellent (Eric &Tim) and very safety conscious which is my priority, and then afterwards we did a second shallow dive on a reef, full of turtles which is probably why it was called turtle canyon, an octopus and many fish. The views of the lush green volcanic mountains from sea was amazing and you could see why ‘Lost' was filmed here. On the way back to the dive centre I also got to see where ‘Dog the Bounty Hunter’ lives, it seems TV shows filmed in Hawaii are a big thing. Whilst I was away doing the dives, Maria had collected a hire car and we spent the afternoon driving up to the North Shore, where the beaches are less populated and the feeling more Hawaii than Waikiki Beach.

In fact Maria and I must be the only tourists to Waikiki who never actually went on the beach. We could see it from our hotel balcony and watched many people learning to surf. We walked along the strip each evening looking for restaurants and bars, watching people shop late into the night at the cheap ABC Stores or the very expenses designer stores, but we never went onto the beach itself. 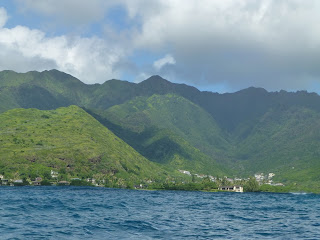 On the way to the North Shore we stopped at the Dole Plantation and had a pineapple whip whilst sitting in the gardens before browsing in the shop. You can buy anything with pineapple on or in it, amazing. 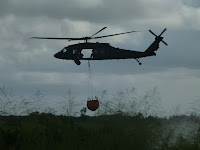 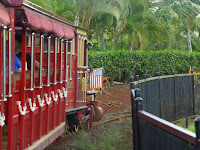 Then we learned all about pineapple whilst travelling the Pineapple Express steam train (not worth it), and were treated to a military display of a helicopter practicing collecting water for fire duty, really spectacular. Then we drove to Waimea Beach, spent an hour clambering over the beach and rocks before driving on to Maluka beach were we sat and watched the sunset, hoping to see more turtles. We had been told it had been too hot for them, and we didn’t see any, but it was a lovely way to spend a few hours.

On return to Waikiki we ticked another of my must do things of the list, we had dinner in Jimmy Buffets, and a cocktail or two, before going back to the hotel. I especially was exhausted. The next morning we had an enormous last breakfast before checking out and flying back to San Francisco. Hawaii is not a short flight but it was no problem at all. 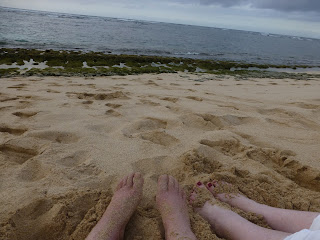 Having watched the odd episode of Hawaii Five-0 when in american hotels I knew Honolulu was a metropolis, but once out of the city the landscape is spectacular and the North Shore just what I wanted to see. Kona was the palm trees and the beaches and the quiet way of life, and Hawaii is going hgh up the list of places to return to. I am one blessed person.