What Worked and What Didn't at TEBS

What motivates me to be a director of UKOUG? PRIDE, Pride in what we deliver and how we 'Serve the Oracle Community'.


My last few postings have been about our annual TEBS conference looking at it from a number of different angles. I talked about change and how every year we have to balance economic constraints with bringing new life to the event. It is a cliche but we live in a very 'Social' world now and many people in our community have embraced Social Networking and that played a big part in the event. Before the event I also posted about the off piste events and thought I would look back at how they went.

This was the 2nd year we had a twitter stream on displays at TEBS although I think it wasn't as obvious this year, but it is great for immediate feedback and  a phenomenal way to create buzz and include those not able to attend. (#ukoug_tebs)

The OTN and ACE participation I have already said was a great success although we have learnt a lot about room allocation and how to publicise changes.

We moved the keynote to the end of the day and that was a great success although I think there still needs to be a kick off session early Monday, perhaps in the exhibition hall, not sure we will think more about it.

A lot of effort went into new ideas, the speaker lounge being on the balcony was a big hit, although I personally needed signage to the coffee. Two nights of networking in the exhibition hall were a  big hit, and although a lot of people would still have loved a real party, our community has changed and not everyone attends all three days and there certainly isn't more money around to pay for it. By having two networking events till 8pm, people were free to plan their own evenings if they were staying over and I think the balance was good. Networking is the main thing people attend conferences for. They come to learn from the sessions but it is that being able to discuss it with the presenter, other delegates and other users that really brings value.

Roundtables are still a great sucess, I attended the Willow table for the Applications Community were for the second year Cliff Godwin, SVP EBS answered questions along with Nadia Bendjedou and a host of our own experts and the Fusion roundtable with Gartner - BUT WE HAVE TO find a location that works, or get the ICC to close down the lifts (elevators) in that area, there is only so much 'Doors opening' you can take. 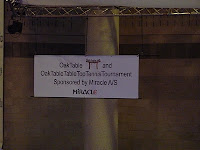 I have learnt that in the UK we are too reserved, the OakTable had their OTTTTT and it was a success in that the table was always in use, but the idea of tournament fell apart because we didn't organise it, spontaneity was not there. We invested in the equipment so it will be back but next year we will allow people to sign up and have it run properly (any volunteers?). And while we talk about the OakTable, where was the challenge? There were plenty in attendance and delegates did get to talk to them but there was no specific 'Go To' place and it looks like we have to organise them as well. So I have learnt that it is not enough to concentrate on the new things but make sure we continue the things that work.

The Inspiring Presentation Awards were excellent and they will be back, but next time with more fanfare and photos. OTN have always supported us both directly and through the ACE Program but their participation this year was just brilliant.

Lisa came up with the IPA awards and was also the catalyst behind the Panto, which was one of the big successes. As I say it that posting, How do we follow that?

So 2010 TEBS was a lot of challenges but a lot of fun. I was always being stopped to be told how people enjoyed it and the networking was always awesome. Wednesday night included people who should have already been home but were stranded because of the weather (how do we control that?), but everyone was still enjoying the buzz. There is a lot of feedback still to be sifted through and our washup session to hold, but I am declaring it another success and thank everyone, The Staff, The Volunteers, The Presenters, the Exhibitors but above all the Delegates.