The ACE up our Sleeve

I often talk about how proud I am of being an ACE Director and the support I personally receive from OTN who run the program. there is a lot of talent in the UK and we have a very good representation of both ACEs and ACE directors in UKOUG and for the past few years OTN has hosted an ACE Dinner during the TEBS conference, with about 35-40 attending each time.

The ACE program is brilliant for acknowledging the experts within the Oracle Community and there is no shortage of them, but how do we plan for tomorrow? My generation didn't even study IT at school, it hardly existed, and yet my daughter uses a computer for everything. Today's graduates look for their knowledge in completely different ways. So when my fellow director Lisa Dobson suggested awards for presentations, I loved the idea, someway of recognising the best and encouraging people to speak for the first time. Lisa has always been an advocate for the 'Newbie' and it is just like her to think of something like this.

Lisa and I are a bit mad, and we often chat online in the evening and have silly little times and you only have to read my next posting about the pantomime to see what we get upto, but on this occasion the result was the GITS, Greatest Inspiring Technologists. a few weeks later at our volunteers event we launched the idea, and people loved it, however they didn't like the name. Lisa went back to the drawing board and they were renamed the Inspiring Presentation Awards. It was quite a challenge to do something this ambitious with only 4 months to go, but luckily we have the successful Partner Awards to base it on, all we needed was a sponsor. I asked OTN if they would sponsor the awards and they quickly agreed, the ACE program needs to attract new blood for the future.


As time was short we looked to other user groups for inspiration and I approached ODTUG as I know they have an awards scheme. Theirs is based on scoring from the last conference and judging of papers for the current event. They were happy to help out but suggested we might want to look at some kind of weighting formula, to make the scoring fairer depending on the number of people voting. Lisa and I thought about it and then decided to bring in an expert, so we asked Cary Millsap for help. He gave us a formula we could understand and from now on it will be called the Millsap Weighting.

It was very exciting seeing who won the awards and very difficult for us to keep it a surprise. On twitter James Morle was saying he wasn't sure about his presentation and yet we knew he had won the best submission judging; imagine if he had pulled out! There were a good number of ACEs in the list which is to be expected, as this sharing of knowledge is one of the criteria for being an ACE. OTN were magnificent, not only did they sponsor the awards but they also sponsored the networking event in the exhibition hall on the Tuesday night when the awards were given out. Vikki Lira came over to represent OTN and it was great to have her there.


There is no need for me to list the winners, Lisa has already done that in her blog, and read the posting from Grant Ronald who won the Oracle Technology Award


Immediately after the awards we had our ACE dinner and there were 35 people who attended and we had a great time in a local Indian restaurant. The ACE program also supports some ACE Directors to present at conferences and there were a few who were at UKOUG for the first time, like Alex Nuijten and Kai Yu. although we are a regional user group we know that the Oracle community is global and it is fantatstic to attract the best speakers wherever they come from.


There was also an ACE Panel question time on the Wednesday, unfortunately there was a mix up over advertising the venue so the audience was not as big as we have hoped but it was a good session and great for people to have the opportunity to ask a question about anything to a panel of experts. 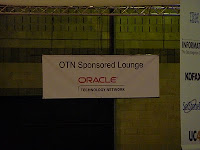 OTN also had a lounge area in the Exhibition Hall and there was to be lots of give aways and goodies, however because of the weather they did not turn up till after the conference. But don't worry, we will give them out at relevant SIGs over the next few months.


Thank you OTN for all your support, both for me personally and for UKOUG.
Posted by Debra Lilley at 21:00