Oh No You Didn't

Having admitted that Lisa Dobson and I are mad, this is the story about how we bought that madness to UKOUG TEBS.

Doug Burns a great volunteer for UKOUG mentioned on twitter that he was growing a moustache for Movember, and that it would come off at the conference. to Lisa and I that just seemed too good a chance to pass up. At first it was just a giggle and we just kept upping the suggestions. Lisa with a cut throat razor, on the main stage, during the keynote, and very soon it had taken on a life of its own. Doug seemed a little nervous but did like the idea it might make a bit more money. 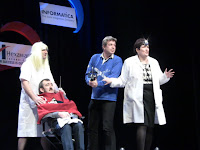 Twitter is a great way to put thoughts out, and others started to join in, when Doug said he thought a cut throat was a bit too much, Marco Gralike offered his services with a chainsaw, now that may sound a bit random but Marco has a history with this weapon of mass destruction and it seemed a great idea. so how do you bring it all together? Well it soon dawned on us that a pantomime would be a fantastic way to do it.

Lisa and I had a call with the UKOUG staff and looked to see how we could fit it in. The main keynote was to be Monday evening immediately before a networking event in the exhibition hall, it seemed the ideal time. However timing would be an issue, but all we had to do was persuade Ronan it was a good idea and ask Oracle to give a shorter keynote! We weren't sure how Ronan would be but he was fantastic, really supportive and even talked us into letting him be the panto dame!

So the cast was coming together - we had our main character - Doug, the panto dame, I would be the principle boy (?), and Marco would be our villain. Lisa was to be the narrator. We did cast one other, to be the nemesis of our villain - Mogens Nørgaard, but a combination of the weather and a misunderstanding as to when it was meant to be led to him missing his time on stage although he still got a mention.

So the panto was set, Lisa got busy with the script, of course we had to find a part for the Stanley the Original ACE Director. Did I mention this was less than a week before the event? Well after a morning finding suppliers for the coustumes who could deliver in time and a 10 minute rehersal lunchtime on the day we were ready.............. and the finished article? well here you are:

Doug tried hard to avoid the actual event, some boring excuse to do with snow, but here in his own words is his version of events.

It was a great success and over £300 was raised for the Movember Charity. Only one problem......... how do we follow that next year?
Posted by Debra Lilley at 21:52