AIOUG has a good number of Apps delegates, both functional and those who support both Fusion and on-premise applications. So, for me I had great audiences. 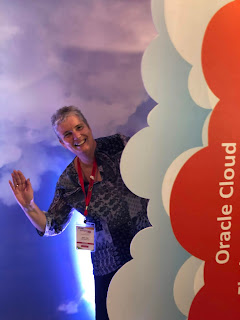 One day one, I gave my ‘Back to Basics’ session. This is one aimed at EBS administrators. It might not matter to the Oracle salesman what is under the solution and probably not to the organisation, but to those who have invested time in running the current solution they want to know what is under the covers even if they can’t actually touch it.

My session followed one with a similar abstract from Basheer Khan. My first thought was not only it could be duplication but what if we don’t agree? Basheer has a different style than me and is more hands on with the technical, so actually we complimented each other very well. Having seen what Basheer had to say, I was able to add to some topics he had covered and spend more time on those he didn’t.

I’ve known Basheer since the start of Fusion and he was part of the usergroup initiative I led in the Product Development Committee. He is also a fellow UX Advocate. He is a real gentleman and great educator, but here at Sangam he was also an Indian who had made a very successful career and business in IT. A real inspiration.

I always judge my session by the questions, not by the number of delegates, although here
I had about 60-70 which was amazing. Questions show the level of understanding you have delivered to the room and help me to develop the session further. I was very happy.

Day two, first up for me was my ‘Which Cloud?’ presentation. This is based on an Oracle Scene article I wrote. To me it is very simple, but delegates love it. Feedback I have had is that it talks about all the options in one session, rather than their account manager selling Fusion, the EBS team telling them not to worry, they will go on supporting and enhancing EBS and perhaps their IT team for or against a cloud platform. I always leave a lot of time for questions in this session, and they came. Each answer is of course prefaced with the famous Ask Tom, ‘it depends’ but I love this paper.

My third session was ‘Extending Fusion, #PaaS4SaaS, AGAIN straight after Basheer on the same topic, but again from different angles. Great for delegates. As is common at conferences the Wi-Fi was not up to par, but Sai came to the rescue with a 4G dongle. It worked fine for my PC but not so with my phone so the chatbot portion was a little light on demo, but I always have screen shots. It all worked and since Basheer showed a lot of ADF I was able to shorten that portion and do more on the new Digital Assistant and VBCS.

I could talk all day on Fusion and this conference certainly gave me plenty of opportunity. Throughout both days I had many corridor discussions with delegates about the products and PaaS solutions.