I wasn’t attending on behalf of UKOUG but you are always on duty as an ambassador. Our President Linda Barker was over representing UKOUG and Fiona Martin was also over with her employer, and many of our volunteers were also over in various capacities so UKOUG was well covered.

I was very disappointed with the user group pavilion this year, it is great that Oracle gives the user groups stands were delegates can come and find out more about what is on offer, but the location this year meant that even those manning the stands found them difficult to find, and you certainly didn’t ‘just come across them’. 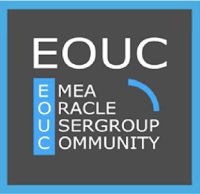 Each Gloabal user group gets a number of sessions for User Group Sunday, and UKOUG are part of the EOUC covering user groups in EMEA. I had the opportunity to present ‘Forming your Future’ when Kashif Manzoor became an Oracle employee and had to step down. EOUC decided that as it was late in the process they would rather keep the title, so I as an Applications Cloud person was given the slot. I also had the privilege to again facilitate the EOUC session given over to the database experts.

I didn’t attend the user group receptions, I seriously didn’t have the time, but I did on behalf of UKOUG take part in a customer feedback session on all things Cloud. Oracle had asked many different feedback channels to take part in a number of 2 hour sessions, and completely co-incidentally the session I attended had 3 UK and one Irish partner in it and a couple of US customers. My feedback specially from users was that it is very important to know where Oracle are going but that customers who have no immediate plans are feeling like it is being forced down their throats. I know this is at odds with my day job, Certus is a Cloud only company, but as a UKOUG elected board member I am representing members.

I also had a number of meetings with people who will be speaking at UKOUG, and of course with the UX team who are bringing their scavenger hunt to UKOUG and thank to those volunteers who took part at OOW so we have feedback for our own event.