On my last southern LAOTN tour we didn't go to Argentina, so this was a first for me, and a new pin for the map in my kitchen.

We caught the ferry over from Uruguay, although it was 3 hours the crossing is for across the River Plate not a sea and walked to the Hotel. Earlier that day a whale and been stranded in the harbour and was happily released, but I wish I had seen it. 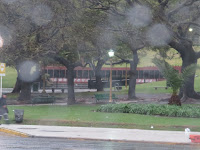 Cindy and I looked into a private tour of Buenos Aires and although it rained, and rained we had a great time. I was really moved by the drive past the Malvinas monument as my father's regiment where part of the Falklands Conflict. It was interesting to hear about it from the other side.

The highlight of the tour was the cemetery and in many ways it reminded me of New Orleans lots of grandiose mausoleum structures had so much history. 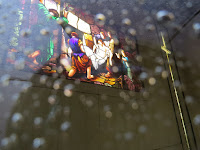 There were so many beautiful tombs with ornate glass windows and some that lacked the acre and attention they deserve, but our guide explained they are thinking of charging visitors to pay for the upkeep which I approve off.

The most famous of the tombs was that of Evita Peron which attracts lots of visitors. It made me feel like I was part of history, funny as it is all just based on the musical, I never studied history. Cindy however is a history teacher so she was much better educated. 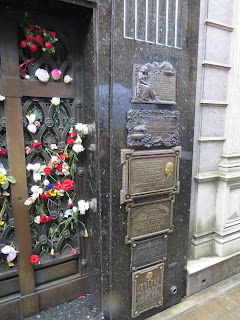 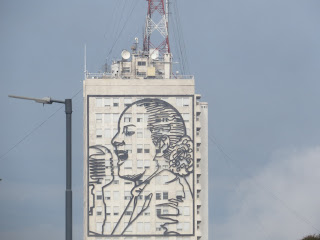 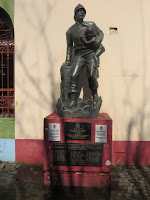 We also went to the very colourful district of La Boca which had a number of monuments dedicated to volunteer firefighters. La Boca is also famous for a football club but that doesn't interest me. 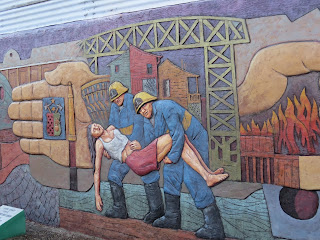 Opposite the university where the event was held was one of the most famous cafe's in Buenos Aires so we were spoilt. 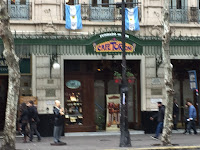 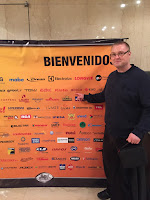 We stayed in the Hilton and they also had a conference which may well have been for white goods. Something our laundry loving Tim got excited by.

After the 1st day of the event the AROUG took us to dinner in a traditional Argentinian restaurant, who did a really good job of feeding us early (the locals eat really late) and feeding Tim, vegetarians are not common in South America.

We left after the second day and were disappointed to be fleeced by a taxi driver we had booked. I believe it is one of the world's most frequent scams and it wasn't the last time on the trip either. However it didn't spoil Argentina for me and I will happily go back, hopefully when they have better weather. 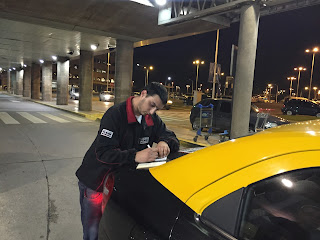 Back to Making the most of Travel