I am a global person, I travel a lot, I work in a global market and I believe in the EU. So the UK Brexit has hit me hard. Like Tim, I am going through grief, but I have the perfect distraction:

Today, I am meant to, fly to Chicago for Kscope16.

When I booked my flight, which is one of the events that is funded by my employer, I selected a route London to Manchester and on to Chicago. Not a brilliant option but I was offsetting some of the cost with air miles, and this route was 50% cheaper.

Not too bad an option as I spend most weeks in London anyway.

Then it transpires I didn't have to be in London I was in Glasgow for OUG_Scotland, Tuesday and Wednesday. So I booked a flight to London from Belfast for this morning (Friday). A bit more of a nuisance but OK. I rang British Airways and had the two tickets linked, so at least I could check my luggage in at Belfast for full journey.

Then I needed to go to Birmingham at short notice on Thursday for the boss, I don't mind, it is my job and I love it. The meeting was in Birmingham because Oracle are remodelling their London office and have no meeting rooms available.

So I went by train from Glasgow to Birmingham. I asked British Airways if I could just join my itinerary from Manchester but they said if I didn't use the 1st 2 sectors on each ticket both the tickets would be cancelled.
So I left Birmingham which is less than an hour from Manchester, to fly home to Belfast, for an 11 hour layover in my own home. To add insult to injury it was on the most expensive domestic ticket I have ever used, apparently people wanted to get home and vote, so it drove up the price.

Useless fact - Do you know most airlines use 'essbase' technology for their pricing?

Just after I got home I had a text (from Tripit) to say my flight was cancelled. London has had horrendous thunderstorms, the runway was flooded and the last flight to Belfast cancelled and so no flight to take off at 7am, the one I was booked on. 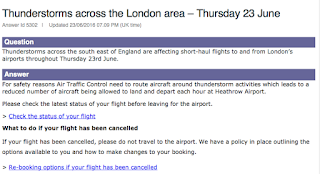 And then a lovely email from BA to say they had rebooked me on a 3pm flight to London.

This wasn't going to work, my connection in London was 10.10am.

But I still wasn't worried, I am a BA silver member and that should count for something. I rang the dedicated line, but it was closed.

I rang the main number, which costs extra money, so far on two 1 hour calls I have spent £40.

On a lighter note to some people, that would have been $60 yesterday, today it is closer to $50!

The lady I spoke to was very kind and tried hard to help, but couldn't fix the problem. The issue is that the flights are 'linked' and not on a single ticket. You can't see they are linked until you open the flight record, and when rebooking one of many thousand flights, it had been missed. They gave priority to those who had onward flights and mine was missed, hence why such a later flight was booked. Obviously nothing available earlier. She did however say I could have a flight direct from London on Saturday morning. Not ideal, I have to find a hotel and hope insurance pays, miss the dinner I have planned when I arrive and miss the community service which I really want to attend. But it would get me to Chicago.

I left it another hour and then went to try and see if there was anyway I could select a better seat.

Not so good either, but she did say if I could get to London earlier they could help me bring that flight forward.

I went to bed, relatively sure something would happen and woke up early today to find we had voted to leave EU. I am not in a good mood. I was confident we would JUST stay.

Then I get a text message to say flight to Manchester delayed!! Why, I have changed that flight? I go online and my account still shows original sectors.

OK, get to airport ASAP and get this sorted.

Belfast 'George Best' City Airport (or rather Kyle Lafferty a temporary rename whilst Northern Ireland are still in the Euros), is small, and in one of two efforts to save money that I discovered today, British Airways no longer have a customer services desk. Luckily I can use priority lane and bypassed the 'hoards' of people trying to check in, only to discover that the very stressed staff can do nothing, yet, whilst they process everyone with tickets for the next flight at 9:10.

So I decide to use the time to ring their dedicated silver helpline and see what they could do. Another lovely person tried to help. He confirmed my ticket hadn't been changed, and 40 minutes later (still paying), he confided their new IT system couldn't handle the change for some reason, but he had put a note 'IN THE BOOKING' to say I wasn't a no show for Manchester and that a seat was held on the saturday early morning flight. He said once I got to London there would be customer service people who could help.

At 8:15 I re-presented myself to the checkin staff who under stress where still a long way from having everyone already flying processed so they asked me to wait. Another 25 minutes, and then they tried to help. They really tried, but, and I know so much about airline systems now, the flight was technically oversold, so they couldn't have put me on standby. If they had got in before the system automatically closed the flight they could have overruled it. If I had hand luggage only they might have been able to do something, but despite trying and trying, they couldn't.

So a very full plane but with at least one seat available, not leaving for 40 minutes, was leaving without me.

At this point I was near to tears. No flight till 1.40pm if they can get me on it, and then not enough time to get a seat on last flight to Chicago even if the ticket desk is empty and staffed by the nicest person on earth when I finally get to Heathrow. I would have to collect my luggage as well as they can't check it through without a confirmed flight.

Still, under EU law I can get compensation, according to sign I had been staring at for over an hour.

But will they pay now we have voted to leave?

Now the queue had died down the nice lady at check in, and don't get me wrong, everyone has been nice, this is a combination of bad luck and a new IT system with bugs. Anyway I asked if I could get BA to change me to the 4pm flight from London to Chicago would she be able to get me on 1.40 flight? She tapped away for about 15 minutes and eventually said 'done it'. She had got me on both flights. And actually if this works, I will only be 3 hours late to Chicago, a better routing and even a slight upgrade from 'cattle' to 'special cattle class'.

Now it all depends on the flight being on time as the connection is rather pushing it, but I can run and I have a change of clothes in my hand luggage as I was expecting to stay at Heathrow overnight.

Just need to wait 4 hours now. I thought at least I can work in the lounge, but I was wrong, remember I said two BA cost cutting measures? Well the second is only to keep lounge open for two hours before flights. Luckily my IOD card got me into the other lounge, and there was one bacon roll left. Not all is lost!

I'll update later to let you know if I make it, but to finish on a positive note, when I checked the Heathrow website to see if flights on time, I got this message.

Obviously people are confused and these are the people who voted us into this #Brexit mess.