So I wrote part 1 at lunchtime to vent my frustration and hoped it would be followed up with, "I've arrived"

After two hours in one lounge and another two in the BA lounge my 1325 flight was delayed ten, twenty, thirty minutes and finally we boarded the plane. With a following wind I might, just might make the 1600 flight.

Seated, belted and then an announcement from the pilot "we have a misunderstanding with air traffic control in Belgium, it appears we don't have a take off slot for another hour".

Then later he says, 'the good news is they have reduced it by 5 minutes'. Finally took off at 3pm, that is 60 minutes before take off of my trans atlantic flight and a 75 minute flight between me and Heathrow.

At 4pm he announces a pretty common "it's busy at Heathrow and they've asked us to go around once more" - the views of London were beautiful but didn't really help. I did meet the most interesting guy on the plane and we talked about religion and its place in conflict resolution. The only good thing all day.

We landed at 16.13 but then we told "there is unfortunately no stand for us to park at", we finally got off the plane after 1700.

Then it was time to queue again for a reroute. Domestic T5 has no priority lane for connections and when it was finally my turn, I was offered American Airlines at 10am.

I eventually persuaded them British Airways at 1120 would do. Then came the hotel options, they had an IBIS (US equivalent Motel8) or a good hotel in Paddington. Those of you who know me in London know Paddington is my weekly home. Anyway finally went for a pay and claim back option and am in T4 Hilton.

The knock on effects at Heathrow included there being no overnight packs available, total confusion over what compensation or vouchers to hand out and very little information.

I had even managed to get an upgrade on the 2nd rebooking of the day and now I am back down to cattle class but at least it is an aisle and on a plane going to Chicago.

So I finally get to hotel, and spend the next hour phoning hotel in US to say I will be late please don't give away my room, only to be greater with not sorry to hear that, look forward to seeing you tomorrow but "you know you will still be charged?" 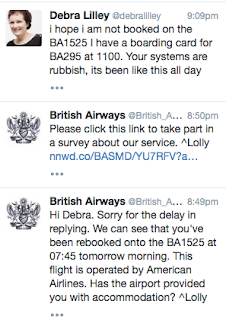 I had a dinner meeting this evening planned, I was taking part in the community service day tomorrow. Both cancelled. An entire day wasted and another one travelling to go. I travel a lot and normally I get annoyed but it doesn't out me off. This is becoming a nightmare, and remember this was caused by rain.

Then I start on this blog and the twitter fest I have been having with BA suddenly comes back to life. Worrying thing is A: they think I am on a different flight -

What does their IT system do?

And B: they think filling in a survey on customer service is going to make me feel better. It didn't.

Is it OK to swear on a survey?