After parts I and II this is the final chapter.

I got to the airport hotel about 7pm, and just couldn't be bothered to eat. I should have done, I was entitled to British airways paying for it, but I was just too weary.

I also met people on the same flight as me from Belfast who were given £10 vouchers for outlets at the airport and no one offered me that. Probably they were simply stressed and too busy, they had also run out of overnight kits.

So I went to be at 10 it had been a very long day, I had a boarding card for a flight at 11:20 and I was resigned myself to having missed my plans for Friday evening and that I would miss the Kscope Community Service Day.

What did help was all the people on social media keeping my spirits up, and the idea of #fingerscrossedfordebra.

What didn't help was Mark Rittman, who by coincidence was always booked on the 11:20 and was contacted to be given an upgrade to club class. That's fine, and it reinforces a strong belief of mine that only men travelling on their own get upgrades but he does love to rub my nose in it. 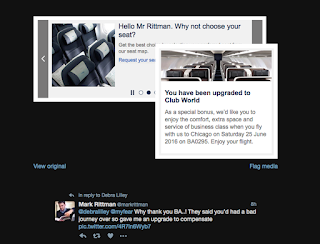 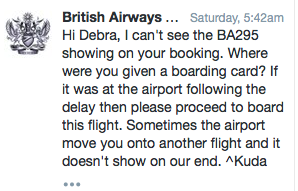 Anyway roll through till the morning and I'm woken by a message to say my 7:45 am flight is still on time. And a twitter message from BA in response to my last message 8 hours previously to say, sorry we took so long to come back to you but we can see you have been booked on the 7:45.

So I went straight back to them who said, sometimes the syste doesnt tell us!! There was no way I was going to get ready and over to T2 for this flight and i still had a luggage tag and boarding card for the 11:20. 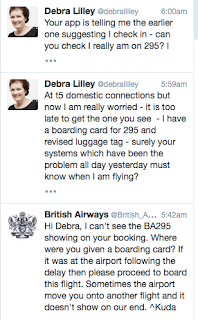 I went straight to customer services in T5 and they confirmed I was on it and my bag was actually loaded already. Then I made my way to the lounge, checked twitter and Mark is tweeting more pictures of his upgrade options. Others are telling me he is joking but I know he isn't.

I got to the lounge and the gentleman there said the boarding card was not valid. apparently it wasnt entered properly in the sysyem. so another 10 minutes before that was sorted. 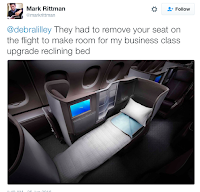 And once I got to the gate for an on time departure, there is Mark with his upgrade. In fact he even tweeted as he left me waiting when they called Club Class. But I felt great relief when I was sat in my seat (in cattle class) ready to go. Then the pilot announced there would be a short delay when they found someone to remove the luggage trollies left behind the aircraft on their parking lot!!!!!

The journey was fine, Bryn Llewellyn was also on board, he had been moved over from a United flight that had been cancelled. I'd like to say everything else was ok but an elderly gentleman decided to open a luggage locker and hit me with a violin.

We landed, did immigration and collected luggage with no issue at all. Bryn and I shared a taxi to the hotel, and I was here, at Kscope16.

I'm not blaming any one person at British Airways, it was chaotic, but whoever is in charge of that software needs to accept here is a problem. I have had 7 different boarding cards to take 2 flights and you just couldn't make up the sequence of events.

But it is all over now and thank you to everyone who encouraged me past my sense of humour bypass, and the great welcome I have received once I arrived.