I did it - I did the Fusion UX Demo

Yesterday I talked about doing the first Fusion UX advocates demo, today at RMOUG in Denver.

My presentation was talking about Fusion Applications being a window on the technology. I have talked many, many times about the Oracle Apps Strategy, understanding what the technology is behind it, and what people should be thinking about. Last year I submitted a paper for OOW entitled 42 Real Life Examples of Fusion Middleware with Apps (which you can download here). I asked my ACE Director colleagues for their examples, and was not entirely surprised but found that most organizations are using FMW to do old things with new technology. This is not bad, and in every case there was a win for the organization, but it made me start to think that Fusion Applications may actually be this Window on the Technology.

So I was taking parts of each of these presentations, and by being able to add the Fusion UX Advocates demo, and some of what Patanjali taught me about how FMW Built the UX, I hoped I would give people their first glance through my window of thought.

Putting together my presentation was fine, I had most of the content from previous demos, there were some Oracle slides that Steve Miranda and the UX team allowed me to share, so I also needed permission to share my pdf, but I have that so hopefully they will be available in the next few days.

The hardest part was the demo, as Fusion Applications are pre GA, I had a viewlet, around 13 minutes. Yesterday I repeatedly went through the script, noting the times the cursor would get to each part. I had the script printed out and thought I would be nervous enough without having to leaf through all this paper, and then I had a brainwave. Let my PC run the demo, and have the script as a pdf on my iPad. So much easier to handle.

I was all ready and went to bed at 10.30 but awoke about 2:30am and couldn't sleep. As it was now morning in Europe I tried talking to a friend but it only helped for a while. Then I tried working on something else, but no joy. So I practiced again, and again. 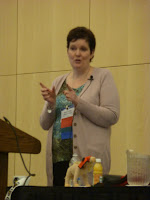 When the time came for the presentation I didn't feel as nervous as I expected, but I did have that good worry. It started badly, I got to slide two and realised I had loaded an old version. Note to self, always delete or rename old versions. But it was only the intro, so I apologised, carried on as I loaded the correct one. Then using my iPhone as a timer, I went through the first 40 minutes of my 90 minute presentation. I was 4 minutes ahead when I started the demo, but that I think went really well. The practise paid off, and the IPad worked a treat; I felt so good. I had worried about the screen resolution, but on the big screen the demo looked fine, and people were really interested.

It wasn't a massive crowd, RMOUG is traditionally more a database community but it was a good turnout and I was very pleased with it. Obviously I await the official feedback, but people I spoke to said it conveyed exactly what the title said.

Thank you oracle UX for making this possible, Fujitsu for letting me be here, The ACE Program for supporting me and UKOUG, it may not have been in the UK, but a UKOUG Director gave that first Fusion UX demo outside of Oracle; our strategy of being involved from the front, paid off.
Posted by Debra Lilley at 06:29