When Scotland Events were first started they tended to be held in Edinburgh or Glasgow in hotels, the more traditional conference venue.

Then when Oracle bought Sun and that came with Linlithgow they wanted to show it off and invited us to hold the events there. But once they started to fill Llinithgo and convert it into one of the first Cloud Data Centres there was less and less room. As Dermot Murray said as event lead, "we will miss the Linlithgow bacon butties but it was right to look elsewhere".

So we went to the Raddison in Glasgow, and I remember being there before. There used to be a sign outside for some sheltered housing named Fusion, and I used a photo of that in my slides for a couple of years. I felt like I was back at home.

We had 222 registrations which was fantastic. We had two Oracle VP keynotes, Penny Avril for technology, talking about the next generation of the database and Rob Harrison talking about Apps and Clouds. We did have one issue, we didn't have a single room big enough for everyone so there we two introductions, one before each keynote, Steve Gold the VP responsible for Scotland and Gordon Mackie the Scotland OUG Oracle liaison . Dermot introduced and hosted the tech stream whilst i had the pleaseure of the Apps and Cloud.

Steve Gold even did a session on the oracle stand, now that is sonmeone who wants to understand his customers, very impressed.

There were six streams and audience seemed pretty well across the board, there were great catering and lots of great networking opportunities.

The UKOUG staff did a great day and apart from some logistical issues with room keys the day was a great success. I had to leave mid afternoon as I had to get to BIrmngham but I was really impressed and everyone I spoke to had a great day.

My time with UKOUG goes back to when regional events were just an idea on a directors' strategy day, and now they are business as usual. 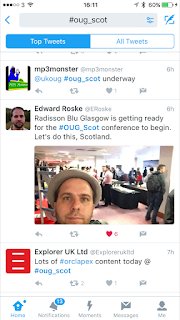 Thanks to everyone to planned, delivered, presented, sponsored, exhibited and most of all to those who attended. See you next year.