Exciting New Role - How Did I End Up Here?


Yesterday I updated my Linkedin profile with my new role and the amount of comments and likes just amazed me. Perhaps everyone has more time to read Linkedin during COVID19 but I was very touched by the comments.

Taking this role was not a simple decision because I didn't particularly label myself HCM. But then I realised I was hung up on historical job roles and not my actual skills.

Last March I posted about dropping the comment 'I'm not technical' - and how it was important to acknowledge my skills rather than talk about what I wasn't.

Since I joined Accenture, everyone assumed I was HCM, and I got lots of opportunities to add value to HCM projects but I found myself saying quietly "I'm not really HCM'.

I left school at 16, as early as I could, and my first job was as a procurement officer for Crown Agents. Later I did international banking with them and studied part time to get some banking qualifications.

Accidentally I got into programming, and worked for a government department covering agriculture, but didn't enjoy it as much I expected as I didn't have the customer contact I wanted.

I moved into IT operations at a time when autonomous had never even been considered. The second mainframe I worked on, an ICL 2900 series, still needed a punchcard to set the system each day (we didn't run it 24 hours).

Then I moved to analyst programmer in Berlin for the army and worked on logistics systems.

When I came back to the UK, I worked for my local council on their Finance System and I felt at home, looking after their procurement processes, combining my technical and business skills.

I stayed with these functional themes, but went through a number of technologies, range Cobol, FoxPro, MS Access, Ingres and eventually Oracle.

I then ran a support team in Fujitsu for Oracle E Business Suite for a couple of years and the functional knowledge widened. I love understanding how the technology supports the business.

When I moved into consultancy the obvious thing for me was Finance. Although I remember overhearing two consultants talking and saying I shouldn't be in Finance as I wasn't an accountant. That knocked my confidence for a long time, but I took on the Procure to Pay process and succeeded.

My first end to end implementation was in the South of Ireland where the travel there was the biggest challenge, but I worked with Paulo Soromenho who was brilliant (at Oracle not travel, he drives too fast!!) He increased my knowledge to include Inventory and Fixed Assets and after 6 months there and another project running in parallel. I have always said if you are valuable you can shape your own role and I did. My success was finding people who believed in me and who would help me to learn.


I still dabbled in technology, and the DBAs let me do little things (dab hand at ADPATCH). This was were I realised I wanted to be the technical linguist, the person who understood both sides.  I felt pretty confident and became the first person in EMEA to be certified in the new Applications IT Professional as an Oracle Master which required you to be proficient in Apps and underlying technology. 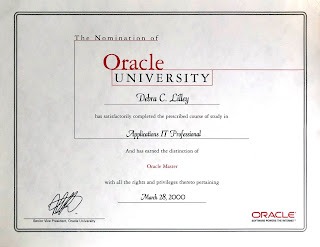 I have talked about my Fusion journey many times, and the opportunities it gave me and the first customer I worked with was finance but it was very early, and the market had not taken off.

I did a lot of speaking about Fusion, explaining how it worked, and again both technical and functional. I appeared in an early Oracle montage video, saying I thought they had made GL sexy, although Steve Miranda did later question my definition of 'sexy'. I delivered a lot of training, especially round their approach to User Experience and both the database (thank you Cary)  and analytics community (thankyou Mark) invited me to talk about the underlying design.

I joined Certus, Cloud was new, Tim Warner and Mark Sweeny had taken the risk and setup as a fusion or rather SaaS only company. At the time HCM was what people were buying in UK. The co-owners Tim Warner and Mark Sweeny I remember that one thing we discussed was the need to get ready for, and win their first Finance implementation. So to start with I did a bit of HCM, then a bit more. My first hands on job was to write a compensation guide for a luxury goods company (thanks Ian for the opportunity and patience). I was able to draw on my experience as an employee, a manager and a very protracted employee dispute I was witness to previously that resulted in many months at a tribunal. At the need of the first year we won two Finance or rather Finance and HCM projects and I was knee deep in cost centres and transactions again.

As PaaS took off I got more and more involved in how we could extend SaaS and as the customer population grew I did more and more of what I love most, how can we ensure their organisations get even more of the value they were promised? Most extensions have been in HCM as well so POCs I have carried out with Oracle, ADF, VBCS and more recently chatbots have all been based on HCM processes.

When we moved to Accenture, I was still delivering the value whilst finding the right role but people assumed that I was HCM. Despite my insistence I wasn't really HCM, I was doing lots and soon became a 'go-to' person. Tim was European HCM Lead and we did lots of work together.

Last year I even co-wrote some white papers with colleagues in the US, took part in HCM Talk Radio and guest blog for Oracle, all on HCM.

In 2019, Tim and I were part of the Accenture HCM Keynote at OOWLON, talking about Oracle Digital Assistant in HCM (PaaS4SaaS), and this year we were asked to do it again and I was responsible for my favourite thing ever. Encouraging customers to talk about the difference this has made to their business. At this year's event, I said to someone 'I'm not really HCM' and it was pointed out to me that 'I'm not really HCM' had replaced 'I'm not technical' - oops!

Tim retired last week, and there is nothing I can add to this great post from Mark Sweeny. When Tim asked me if I was interested in taking over his role, he said he would give me his full backing, that was enough. No better support than that.

I do some STEM advocacy in schools, and the students are always being told, the jobs they will have might not even exist today. Lifelong learning is key. Our CEO, recently talked to the half a million people in Accenture about the importance of new skills and them being accelerated when based on previous skills and experience.

I know I can do this. I'm excited to do this and actually I am HCM with added Financial and Technical skills. A pretty good allrounder!