This is one of my favourite events. It has that community feel that we all strive for and I guess all being together with nowhere to hide, helps! 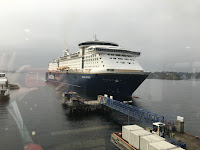 OUGN , Oracle User Group Norway annual conference is held on the boat ColorMagic, and she sails between Oslo and Kiel.

I landed early evening on Wednesday. I had met up with Alex Nuijten , Alan Arentsen, Ronald van Luttikhuizen and Alex's daughter Lara at the airport. We then all caught the very efficient train to Central Station and my hotel was just there.

I always love OUGN, this is a great community that is growing. This was my fourth visit, and that includes the last 3 years consectutively. (it is also where the Oracle family thing started).

OUGN has a thriving apps community within them and the sessions are very interactive.

The event as ever takes place on a boat, with a speakers dinner the evening before. There were not a lot of UK speakers in fact I think it was just me and Neil Chandler at the dinner. This is my first time on tour with Neil, and it was fun.

I left promptly after the dinner to get some sleep, on the boat you can never be sure. I got into a taxi with Kuassi Mensah which is something I had not done since a fated taxi in Beijing!

The following morning I had breakfast with an amazing Portuguese friend I once worked with in Ireland, who know lives in Sweden but was visiting a customer in Oslo. Meeting people at events is expected, but Paulo was not at the event, I found out he was there as he posted something on Facebook the night before. I love Facebook, otherwise unless we walked into each other we would not have known.

Then I caught a taxi to the docks and we boarded the boat. The opening session is held in a casino but this is ideal, semi circular and tiered seating. They announced about 350 delegates but only about 60 women.

Once the sessions start I don’t actually attend many as most are in Norweigen, however I have plenty to do, my second session is an old one and in the world of cloud things change rapidly. The presentation is on extending Cloud Apps and I did give it on this boat two years ago, but that was release 6 and we have started testing release 11 so things are very different now.

Lunch is served in the exhibition which is held on a car deck, and consists of multiple stations with food from around the world. The asian noodles were amazing.

My first presentation was on day one, I talked about moving from EBS to Cloud which is what would be the most popular option here, the room was full and we had to get more chairs but best for me, more than half were women. I did talk about how Oracle selling has changed and the single oracle salesman in the room did get the brunt of my comments, but he took it well, and we talked more over the trip.

After the sessions there is a reception in the exhibition area and then an amazing dinner. It is quite late as the restaurant has to cater for the ordinary passengers, but the food is yummy and the alcohol flowing. This year I was very well behaved (compared to last year) and went to bed after dinner which was late enough at 2330.

On day two the boat docks in Kiel for a few hours. I went ashore with Alex, Alan and Lara, I wanted a currywurst, a typical german snack and normally there are stands by the railway station but not this time. Luckily Alan found one in the shopping centre so I was very happy. Also missing this year was the traditional Gin Party from Bjorn, who living just an hour away would meet those overseas speakers at Kiel with food and Gin. He has now emigrated to Canada. 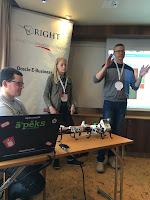 I then attended a session by Alex and Alan where Lara helped. They talked about Apex, Node.js, Websockets etc and showed how this combination could drive lego mindstorms

I learnt quite a lot from the session and the following week when I was at the OFM Forum web sockets and node.js were mentioned many times!

My second session was also full and what I really liked was from PGS Who had earlier given a presentation on their use of on premise Fusion. I hadn’t attended as it was not in English. I do understand that for many customers Public Cloud is not the answer, and there are more offerings from Oracle as alternatives for this. Look out for more details soon. 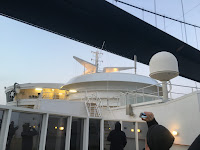 My favourite part of the cruise is sunset on the 2nd day, when you go on deck and sail under the Danish Great Belt Bridge. This year was cold, but no where near as cold as last year or as rough as the previous one, but it was a bit overcast. I never cease to be in awe of this sight.

We then took the opportunity to watch a variety show in the casino which was very good and then we went to the closing event in the exhibition area, and then we had another great dinner. After dinner the conference closed in the casino with a prize giving and a disco. 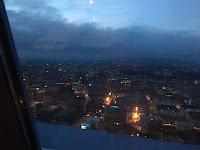 We arrived back in Oslo mid morning on the Saturday. I cannot get home in the time left, so I stayed another day in Oslo and had some coffee in the sunshine with some other speakers and then in the evening a meal with fellow Ace Directors Gustavo Gonzalez from Argentina, Osama Mustafa from Jordan and Sai Penumuru from India on the 34th Floor of our hotel.

Thank you OUGN and I hope to be invited again.
Thank you OTN for funding my visit.