Stop two was Amman in Jordan, and a lesson in preconceptions and assumptions. 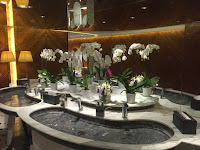 First we had to get there and it was two flights, one to Istanbul and then onto Jordan, both on Turkish Airways. We should have had just 2 hours in Istanbul but the 2nd flight was delayed which gave us another few hours to enjoy what must be on of the world's nicest lounges.

It wasn't my best journey, I was given a great seat at an emergency exit on the first plane but some dutch person decided he would spend almost an hour stood in front of me. Now I understand they need the leg room they are so tall, but it doesn't need to be my legroom! I was on the verge of air rage but being British never said anything. I also had a guy in the row in front who kept trying to take selfies with me in them. So I kept ducking my head, again I never said anything, I was frightened of losing my temper. Bjoern, sat across the aisle form me just couldn't stop laughing.

Then Bjoern had a bad few hours, lack of sleep, lack of food and lack of decision making, just got to him. So OTN Tour Tip #1, ensure you include a dictator or selfish person. 4 people traveling who are all polite means 'nobody minds' and no decisions are taken quickly. Alternatively we need a random generated decision maker app. However wonderful food, coffee and a Skype lesson from his wife on how ignore Bjoern, everything was OK again.

I then tried my hardest to get us thrown out the lounge by reaching out to a stack of coffee mugs, grabbing one and turning it up the right way.  Problem was I had grabbed a jug of milk in error and then poured it over not only the floor and myself but the stack of at least 42 mugs. Wish I could understand turkish, I bet they had some colourful things to say about me.

Once we finally took off for Amman, that flight was fine, the only issue being that we didn't arrive until 2.30am. Our host from the local, Jordan Amman Oracle User Group was fellow ACE Director Osama Mustafa and he was waiting for us at the airport, now that is dedication. We actually arrived at our hotel at 4am, just as the call for morning prayers was starting. 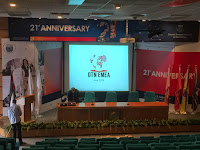 Just a few hours later it was time to go to the venue Princess Sumaya University for Technology , a beautiful venue. AJOUG had a decent registration, a mix of local professionals and many students interested in Oracle. Unfortunately it was graduation day for students and somehow this meant we lost our student delegates. I think there had been a misunderstanding in that those not graduating had been told to stay away from the University, and that our event had not been identified as an exception. This was disappointing for AJOUG but hopefully, the connection has been made with these students and they will be able to continue with that, and we have all offered to do a webcast if it helps later.

What I learnt was that when you graduate in Jordan it is a big thing. There was a party on the campus with lots of noise and dancing, and in the evening they all drove around the city with balloons and students hanging out of windows and honking of horns. Looked great fun.

The audience was now very technical and they loved the sessions deep down in the database, and that combined with a very late start, a combination of local culture plus time spent looking for our students, and the university cutting short our access to the venue, meant I decided to drop my sessions for this event. I had good conversations with individuals about Cloud Applications and adoption, so I didn't feel too bad, and for the audience it made sense. 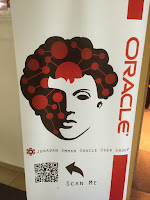 After the event we were treated to an amazing local lunch including the most amazing sweets. Discussions over lunch were really interesting, understanding what people are doing and what they are interested in, and this discussion led to the offer from Bjoern to do a session on Solaris that evening. Then we had a couple of hours to sleep off the lunch (by the pool) and try and get some of the lost sleep back from the travel. 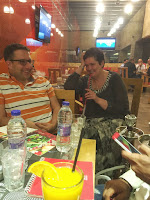 Osama was late picking us up (no surprise) but we got to watch people arriving at the hotel for a family party. One of my assumptions was that Jordan was an Arab state and that the dress code especially for women would be very conservative. Osama had told us they were a very 'open' country but it was still a shock. The dresses were often traditional but the shoes were amazing. I was worried about showing my ankles and wrists and yet here they were being giving centre stage. 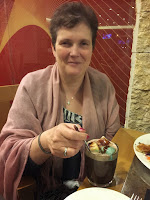 Then Osama met us again and drove us to a Shisha cafe to have even more to eat ( a definite trend on this trip). In this cafe I had my first taste of Shisha, which was quite entertaining and I totally failed to even inhale yet alone taste it.

Again the evening had many great talks and sharing of stories about using Oracle, what community is all about. Bjoern as promised gave the Solaris presentation and a new SIG was born.

Another great evening and another culinary highlight was this amazing hot chocolate drink.


We managed a late start on the Sunday, before being collected again by the wonderful Osama and taken to the airport, where we had time for a foot massage (again an Osama treat) before flying on to South Africa.