I am so privileged to have so many friends in my network, through user groups, the OTN ACE Program, speakers, users, colleagues in Fujitsu and even Oracle itself. Friends from all over the world who I hope to see at OOW.

So what did I get up to off the show floor in the 12 days I spent at Redwood Shores and Moscone Centre?

Dinner with great friend Misha Vaughan on my first evening, the calm before the storm. I love Redwood Shores, I love the walk from the hotel, the view of Oracle never disapoints.

Dinner with the Fusion User Experience Team. Then thursday pizza with those arriving early at HQ for the ACE briefings. Did Dan Morgan really order all that pizza, and did it survive the way he carried it home?

Helping to polish the mimic skills of the ACE Directors as they collectively chant "I'm not technical but..."

Chi Gung with Kent Graziano at the Sofitel. I told them we were being watched from the windows and they laughed at me. Thanks Sheeri for taking the photo from your room.


Enjoying the ACE queue to check in at the Hilton, the must do, not to, be missed, activity for a Friday evening. This video from Eddie Awad is from last year but is almost identical.


Cycling the bridge with Alex Nujiten and Stanley, I did this a few years ago but threw away my camera and had no evidence. Meeting Simon Haslam and Markus Eisele on the ferry home. 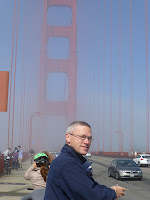 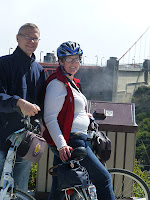 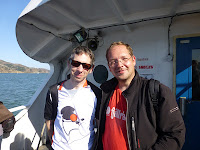 Continuing the energetic theme we walked back to Union Square and I continued to Townsend for the OakTable party. This annual event normally hosted by Graham Wood was this year held in town and wonderfully organised by Doug Burns. I leave Tim Hall to tell you about it.

Oh dear, at the party I discovered that Kevin Clossan was not who I thought he was. I thought Kerry Osborne was Kevin, pity this ACE video wasn't available earlier. Anyway Kerry laughed and Kevin did eventually forgive me.


Sunday evening was the ACE Dinner at the yacht club and a chance to say hi to so many people and for Stanley to party with friends. 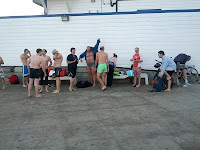 Monday morning thanks to Oraclenerd Chet, I swam in the. Bay, yes you read that correctly I swam in San Francisco Bay! They told me it would be freezing so I bought a wetsuit but actually although cold I didn't need it. I really enjoyed it except for the fact we had no photographer to record the momentous milestone. Even more amazing was that Mogens turned up first, not surprising at all was that he bought his infamous bathrobe. 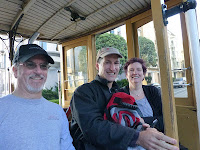 After the swim Connor McDonald who is seriously in training for an English channel swim in 2014, and I went off to get the cable car back to our hotel. Sheeri and Kent joined us and we wind dried on the way back. Sheeri was quite scarry as she simply doesn't hold on even though she stood on the platform all the way back.


Being such a long day and I skipped most parties for a quiet drink with Lillian and Vikki from OTN and then a quick visit to the friends of Pythian reception. How can you not enjoy a reception held in a bar that stocks Mount Gay Rum? 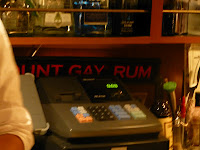 Tuesday evening I went on a cruise with the Oracle Partner Network and was actually very well behaved. I thought it was going to be a real session when I spotted the rum sign ( can you see a pattern emerging ) but it was just a cruel joke. I formed a new alliance between IBM and Fujitsu as Fiona and I put the world to rights and then paid far to much for a limo home, determined not to be led astray (on this occasion) by other OPN characters.

Wednesday morning another session of Chi Gung watched this time by local Chinese experts in the Yerba Buena Gardens followed by an excellent french breakfast. However not sure I liked the idea of drinking coffee from a bowl!


Later was the bloggers' meetup, sponsored by Pythian and I was lucky enough to win an America's Cup Oracle Jacket but I'm not saying how!

Wednesday was the appreciation event and as Fujitsu were sponsors I had VIP tickets. I thought Kings of Leon would be my favourite but actually Pearl Jam were brilliant and the guitarist amazing. 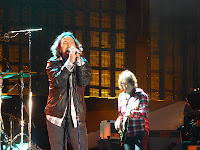 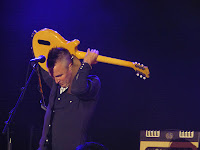 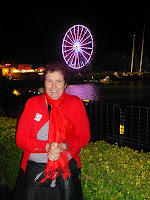 The new jacket came in handy for Treasure Island where the event is held. It was great to see the boats in the bay along side the rides.

Thursday morning I had breakfast with my friend Sue Shaw at Mels Diner ( no trip to San Fran is complete without this ritual). 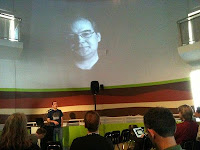 I popped into the OakTable Closed World or whatever name Mogens wants to try and be controversial with this year. The venue, was excellent. My only concern was it allowed the Doug Burns to project an godly image of Mogens on the ceiling which was probably about the correct size for his head.

Thursday evening I attended the annual Fujitsu Dinner in Forrinas, a fantastic Italian on 18th. Then afterwards I had a quick drink with Marcelle and Alex.

Friday morning I said goodbye to the Dutch. I loved it when they left, not because I wanted them to go, I didn't I love them, but because I could go back to feeling tall. I would also like to congratulate Marco for tricking me into buying the Coffee for Roel, not that I minded.

Friday afternoon I enjoyed the sights of San Francisco and had the most amazing flat bread at the Cheesecake Factory in Macy's.


Saturday after the luxury of a lie in I had coffee with a few stragglers from Germany and after they left went shopping, then it was time to hit the airport and go home myself.

Yes I worked hard, but I did enjoy the craic as we say here in Norn Iron.
Posted by Debra Lilley at 09:46