My first thoughts about the Philippines was that it was going to be expensive, Beijing was cheap despite the scams but our hotel in Manila where the conference was being held was very expensive. Anyway I supose it is swings and roundabouts through the tour and still less than what San Francisco was charging during OOW.


I had a hotel car pick me up from the airport and I must admit one thing I never tire of is being meet off a flight by someone holding up a sign with my name on it. During the journey there was in car wifi so time to catch up on my mail. Good thing because this event still had a 'fluid' agenda and a few gaps we needed to fill between us because someone had let the organisers down late in the process.

The first evening just had a cheese plate in the hotel which was wonderful albeit expensive and then retired to my fantastic room. My room rate included dry cleaning and as this was halfway through my trip I simply handed over most of my suitcase to the very attentive staff. It is the first time in a hotel I have been checked in, in my room. Breakfast was also fantastic, and I would compare it to the brunch at the Burj Al Arab in Dubai, perhaps not quite as much choice but far too much and even in this hotel, less cost and yes Nadia they had Fois Gras. 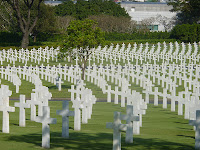 I had only 1 free day here and Ronald, Edward, Melissa and I took a tour around old and new Manila. The most impressive dight was the American War Memorial. So moving and so well cared for, they only employ direct descendants of those buried there. We also visited Razal Park and Intramuros or the Walled City of Manila.

The whole of the Philippines was security mad, with dogs and guards on most buildings, a bit like Belfast in the good old days. 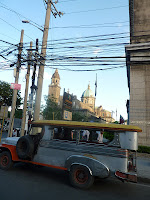 Manila has a lot of traffic, and the most unusal form of transport the Jeepney based on old US jeeps. However they look quite precarious and we saw a vehicle fire on the way back in the dark which we think was one of these.

I had three presentations at the conference, and at the start I also got the chance to say a little bit about OTN and the ACE program. Dinah who ran the show was the Philippines User Group president but they had had to close down because of legal restrctions in the Philippines. Her company was one of the sponsors for this event. There was a good turn out and I always love it when you need extra chairs at an event!

The morning was plenary sessions and mine was the Fusion Overview, then in the afternoon we had 3 streams. It was a big room and the divisions were little more than cubicles an

d at first I found it very off puttng but you soon got used to it. I had a good crowd and lots of interaction for my 42 real Life Examples of Fusion Middleware and then Consolidation to the Cloud.
Thank you Dinah and friends for another great conference.
I then had the chance to meet with Rhine from Fujitsu Philippines and see what they are upto with Oracle.

All too soon it was time to leave and I raced off to the airport with Ronald
Bradford for our overnight flight to Melbourne and onward to Auckland. Mistake, you DO NOT need 3 hours at the airport in Manila, and in fact there is nothing to do for 3 minutes, let alone 3 hours and no WIFI. In fact the only thing to do is enjoy the 5 different security checkpoints, which you must enjoy because you paid an airport users tax as proof, which includes anti hijack tax, so at least you know you are safe.
Posted by Debra Lilley at 22:25