Last Thursday and Friday was the annual OUG_IRE event in Dublin.

For the past few years we have had a single day of sessions followed by a second day of a masterclass; Tom Kyte, Maria Colgan etc but this year after listening to feedback from delegates who wanted more content, the event went to two days of sessions.

We moved location to the Gresham Hotel to accommodate this change within budget and although we have to educate venues that having AV and standard wifi is not necessarily all that is needed for a tech event, there was a great vibe and everyone seemed to be having fun.

After welcoming the delegates to the event and being crowned queen of apologies, John Donnelly, regional Director Ireland, gave us the top line Oracle messages and what that means for Ireland. The creation of 450 jobs is amazing. 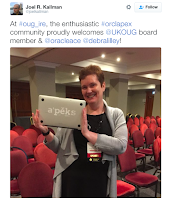 Joel Kallman gave a technical keynote on APEX to a very busy room.

I was heavily involved in the Apps track and didn't get to hear any of these technical talks but I did get a mention from Joel on Twitter.

Liam Nolan, an EMEA VP for Apps Strategy and more importantly a local, had a session on Cloud Apps, that was to follow a presentation by one of the UKOUG Oracle Speaker award winners Margaret Walsh on an EBS roadmap. Unfortunately Margaret was taken ill at the last minute but Liam graciously stepped in to give her presentation, which actually worked out perfectly. With the same person talking about both on premise and Cloud, EBS & Fusion, there can be no suggestion of two different messages and I think the delegates appreciated that. 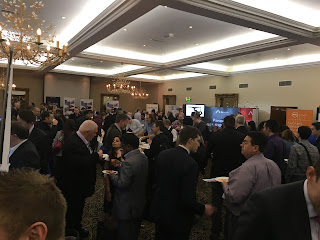 There was a real buzz about the day and lots of discussions in the streams. I am really proud of the committee and the agenda they put together. And as ever thanks to the UKOUG team led by Aimee.

Liam had to leave at lunchtime to fly to Dubai so there had already been some juggling of the agenda and this left me with my two sessions back to back in the afternoon. My first presentation was on digital disruption in the Oracle economy and as whenever I give that talk it gets people thinking. the i talked about what is actually involved in moving from EBS to Cloud. The talk was ok but I do need to 'polish my slides'. However I had several requests for the slides so that suggests it hit a cord.

The last session on the first day was a Cloud Apps Q&A. Liam obviously couldn't as originally planned stay, but Maeraid Dooley French, John Caufield and Patrick McLaughlin from Oracle all joined me and it was a really interactive session, that we had to close down when it over ran.

I was pleased to see Tim Hall creep into the back of the Q&A and he had lots to add. After all what happens in apps affects the technical team as well. (and I can't believe I have got my blog out before him!)

The committee had put in a number of these Q&A sessions and I believe that the Database one which was late on a Friday afternoon really overran and may still be going.............

On Thursday evening I hosted the ACE Dinner thanks to OTN, and we went back to the Rustic Stone, again. This could just be me being lazy, in Birmingham we have often gone back to the Thai Edge, but we need somewhere that can deal with a large party, preferably a set price menu with some choices, and not too exhortionate drinks. we also like to be able to talk to each other, so when we find somewhere that works, we stick with it.

Unfortunately I had to return to Belfast early on the Friday so missed the 2nd day but twitter tells me it was just as good. I really wanted to hear Patrick's session on Cloud Security and Grant Ronald had promised to write a mobile app, in his session, whilst wearing a suit! As I've already said at least one of the Q&As ran way over.

What I really love about this event is there is always a desire to balance Local Oracle Talent, local speakers and end user customers, with international speakers and Oracle HQ. I think the agenda delivered that well.

There was 25% increase in registrations and 50% more content. Job well done.

So a great example of listening to feedback and making it happen for users.