The Oracle Fusion Middleware Forum Forum is the spring training for the SOA Community which I talked about in my last post.

I work with Cloud Apps. At OOW 14 Oracle announced PaaS4SaaS, the ability to develop extensions using Fusion Middleware tools deployed in the Cloud. Certus identified the need to look at this and it is well covered how we did a POC with our development partner eProseed in January 2015.

We won an award for that at last year's OFM Forum held in Budapest in March. This year’s forum was held this week in Valencia. I was really pleased to see that Lonneke Dikmans from eProseed won another award, for work they have done using the Rapid Design Kit we also use for PaaS.

In just those 12 months the number of PaaS offerings has gone from just 2 to 32. I might not actually ever code (I know I won’t) but I do need to know what each of this smorgersboard offers. This is a phenomenal event run by the partner community leader Jurgen Kress. There are two days of sessions introducing the components and then 2 days of hands on workshops.

For me as well as the top level sessions the value is in talking to the product managers in attendance. They are really interested in what we are doing and it is these relationships that make us successful.

In the year since our POC we now have a very strong PaaS pipeline and that is a really short adoption curve for new offerings. eProceed  also presented with Ultan O'Brion from the UX team on the work they won the award for.

I am particularly interested in how all this fits together. In my simple mind, one of the biggest issues around running ‘Fusion’ apps on premise was the complexity and interoperability of the FMW stack, so why will they work together any better in the cloud? I not only listened and talked to the product managers but also to those using some of them. On the 2nd afternoon several of my fellow ace directors, (those that do tech) had set up a system using as many components as possible. It was great fun, slowed down only by the wifi. It was very interactive and gave me the confidence that there are people looking at this and understanding how to do this. I can concentrate on the why.

As ever Jurgen gave us a great event in the most fantastic event. The hotel Las Arenas is right on the coast and the conference centre is fashioned on greek architecture. The weather was quite cool the first day but was beautiful on the second. 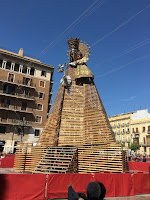 The deeper dives started on day two so once my meetings were over, I snuck away for some sightseeing. I am a great fan on the tourist open top buses and the one for Valencia stopped right outside the hotel. However as it was the festival of Las Falles the bus could not go into the centre but dropped us a short walk away. I wondered around the town looking at the amazing stands and statues and visiting the official Las Falles exhibition. This was fascinating. I then rejoined the bus and finished the tour. I only missed 2 sessions and was back again for the afternoon.

I was very sad to hear that later in the week several students visiting Valencia for the festival died in a coach crash. 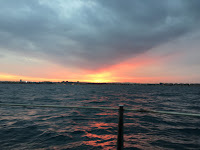 Dinner on the first evening was in a nearby restaurant and then after the main event untrue Oracle style we went sailing. Did you know the USA Team (Oracle) won the 33rd America's Cup in Valencia. What a wonderful way to see the sunset.

Last year I stayed all 4 days having my meetings on days 3 & 4, but it was too long for me. This year I did just the first two days, but I think I should do all of days 1&2 and then arrange meetings for day 3.

It was sad to leave Valencia it is a beautiful city and I really want to go visit again.

Thank you Jurgen for an amazing agenda and for Certus in letting me attend.

And thank you to the unofficial sponsors the TVP Print Room, I have never seen so many pop ups etc for an event. 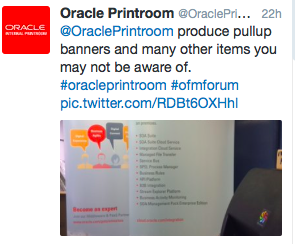