Seat belts were fastened for 2 days of information overload and even more importantly the opportunity to ask questions of the people who make Oracle products what they are.

I find ACE directors in two camps on how they think about these days, some and I guess the split is about 50/50, moan about how little there is in their area. I am in the other camp who think the event is about expanding the knowledge of the areas we don't specialise in. If I came just to learn about Cloud Applications I would be very disappointed.

As an ACE director you have access to the Product Managers in your area, probably have the opportunity to be part of beta testing and either a Customer or Partner Advisory Board. There probably isn't anything you don't know going to be shared at this event you don't already know, unless it is an announcement to be given in a keynote and then you will get it here.
My camp, and I am very clear about this; comes to these briefings to learn about the whole Oracle stack, not perhaps in great detail but enough to understand direction, offering and the bigger picture. We are treated like the intelligent people we are and not given the marketing speak, and if something doesn't make sense to me I can clarify with a fellow director who is in that area afterwards. Likewise when someone wants to know about Cloud Applications they will ask someone like Floyd or myself.

If I had to chose between these briefings (and the UX day) or OOW itself, this would be my choice; luckily my employer sees the value in both.

The 2 day event is under NDA, or Non Disclosure and as ever Duncan Mills was there to ensure no one stepped over the line. As an ACE Director you are expected to be active in social media, and thus it is difficult to tweet knowledge under NDA and so we end up getting quite silly with what we do say. Within the room it is very funny but for those out in the wild following us they must think we are all nuts. 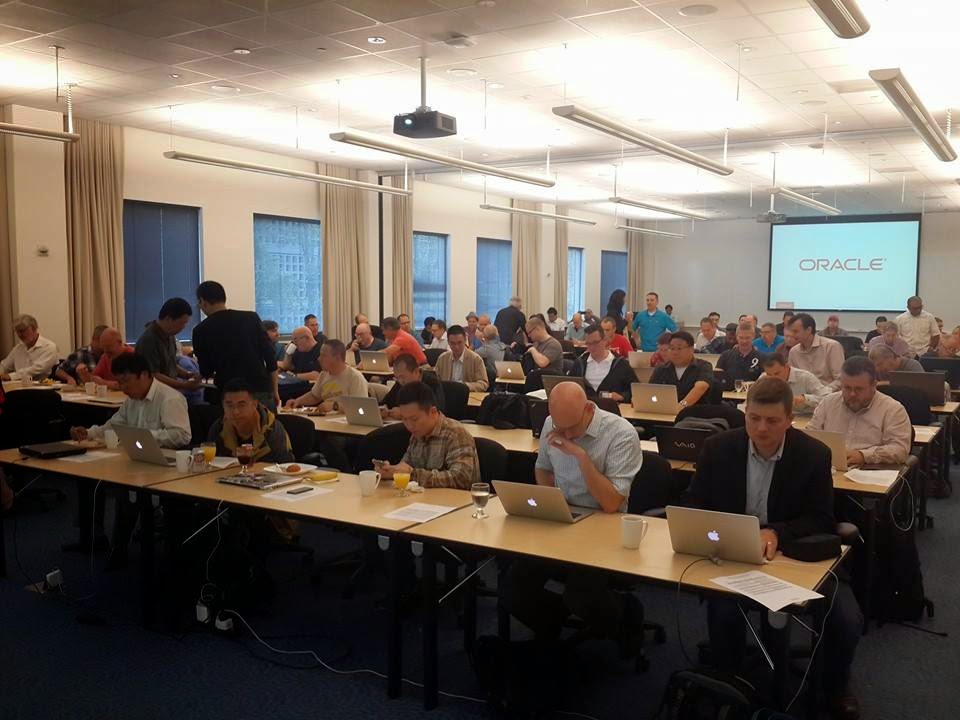 As well as the usual topics covered I was particularly interested in the Mobile Applications Framework as I first heard about this at Kscope and really pleased to learn many mobile apps were being launched not only for Cloud Applications but also for traditional apps, 14 for EBS alone.

Jeremy Ashley and Jake Kuramato repeated some of what they covered the day before at the UX event around ' Shinny Things' and knowing how the demo worked I furiously tweeted so I came up on the demo of wearables, ever the gamer Floyd Teter joined in but  I have to say I won, finally on this occasion.

Another highlight for me was Bob Evans Chief Communications Officer who talked about the PR behind Larry and Oracle. At one point he stated he knew me from Twitter and I was both honoured and horrified; later in the week he apologised for embarrassing me, apparently I went very red, but I don't mind, he has promised to work with the ACE program on a program similar to analyst education for those who are interested. I also talked to him about why this year the ACE program was excluded from the Press / Blogger program for OOW and he will look into that too.

But by far the most important part of the event is the Thomas Kurian session. Thomas is the biggest supporter of this program, he comes along gives us a very fast but very comprehensive run down of the announcements to be made at OOW and then opens up to Q&A. Remember that NDA we are all under, he leaves nothing out and trusts us completely. A big responsibility but that is the benefit of being at Director Level of the program and why it is reviewed individually each year.

Thank you to Roland Smart who leads OTN, Victoria Lira who runs the ACE program assisted by Jennifer who has replaced Lillian who recently left to work with InterRel.

Back to My OOW14 Recap