The day started with our CEO Duncan Tait speaking about our engineering heritage and the pride we have in our people. Later they launched a new short video on our innovation highlights; well worth a watch.

Dr Joseph Reger our Global CTO talked about the importance of a full customer solution and how that is our differentiator, if we separate services and engineering we compete against the mainstream, but together we are a winning combination.

Professor Martyn Guest from Cardiff University talked about High Performance Computing and the importance of increasing speed. He told us of one simple chemistry research query that in the 80s took 3 months to run and today takes 0.25 seconds. However as Moore’s Law tells us the amount of data to be processed keeps growing and technology must keep up. Fujitsu’s K computer is all about HPC or Advanced Research Computing as he refers to it. He gave examples of where HPC can be used especially around simulations and one that resonated was that 911 was a predictable event. Not the terrorism itself but a fire and building collapse, this should have been simulated and procedures could have been in place.

Amyas Phillips from ARM talked about the Internet of Things – and how this is the next evolution of the web, and is one of the things that feeds big data, when it is the sheer volume of little data that makes it big. He also talked through this and other technology drivers like SOA, Analytics, Cloud and the way they have worked against the Gartner Hype Cycle. This presentation was one of the most thought provoking I have attended outside my own area.

In the afternoon there were some networking workshops and I went to the Internet of Things as the possibilities here are endless. As ever I took it to a personal example. My cooker brain has died and although the cooker works it wont ignite the oven! OH how I would love a chip in that which would tell me not only what the problem is but also recommend someone to fix it. However currently I cannot get an engineer as Corgi Gas Regulationswill not recommend a repair on an appliance over 10 years old, which is ridiculous as my oven only does 2 meals a month! A chip could also measure that and perhaps meals cooked could be the unit of measure rather than age; a bit like miles flown in an aircraft. Fascinating topic, the Internet of Things which will drive so much innovation.

The reason I had been invited was because I had written a couple of white papers in our global Solution and Service Professional (SSP) Awards. The final session of the day was a presentation from 3 of the those who had successfully had their papers submitted to Japan and it was really inspiring to see what others are up to. One of my papers on the adoption and implications of Engineered Systems mad it through this round but I wasn’t asked to speak and it was quite weird in a way being at a conference without presenting.


Other guests were up and coming engineers who it is hoped will be inspired by the event to step up to the attributes required to be nominated in future years. 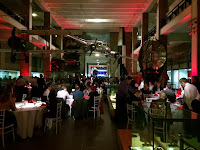 The event was held in the Science Museum in London and it was an excellent and very relevant venue. We had time at lunchtime and at the end of the day to look around and as a frequent flier I was especially impressed by the History of Flight exhibition. At the end of the day we watched a 3D film on the building of the International Space Station which was really interesting, I never realised it was such a long project and each piece was built separately around the world and they only knew if they fitted together once they got into space! 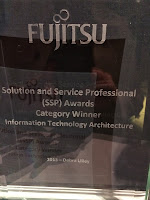 The day finished with a great dinner and the awarding of Distinguished Engineer to those who had been granted the title. Then they announced the UK winners of the 6 categories for the SSP awards and I was bowled over to win ICT Technical Architecture Award. I was really honoured, it is my paper my work but reflects the various projects my colleagues have worked on and their development of the solution.

It was an awesome day which I will remember for a long time.