As ever I would like to start by saying these briefings are by far the best benefit of being an ACE Director. It is my annual technical top up, where I learn enough to keep me going for the rest of the year. I think it is so important that you have a watching brief on all things Oracle, my role requires me to be able to explain to colleagues, customers and users at all levels what Oracle does from a business point of view and that means I need to be able to explain it to a CEO or a developer or a data input clerk and to do any of that I need to understand it myself.

The ACE Director briefings happen the Thursday and Friday before OOW, the calm before the storm; everyone getting ready for the big jamboree but still not sure exactly what will be announced. For the briefings we get all the product managers come tell us what we will hear and as well as the normal Oracle Rev Rec slide we constantly get reminded that we are all under a Non Disclosure Agreement. This is a real privilege and an opportunity to ask questions of the people that really know. Getting the main messages before OOW means you have a chance to think about them and plan to go to any drill down sessions or demo stations to understand better. There were breakout sessions for E Business Suite which was great as 12.2 had finally been released and it meant we could drill into that too.

A very popular session was Jeremy Ashley and his team from UX Development. I have written many times about the UX team but as they share their findings with the wider community more people are showing an interest. There was also a dinner for the Fusion UX advocates amongst us and I spent all evening trying out Google Glass, and have to say pretty cool and no harder to adjust to than bi-focals!


Another session I was very keen on was on AppAdvantage a new initiative being launched at an executive lunch during OOW. In the past Oracle had a FMW4Apps team that showcased Application customers who adopted Fusion Middleware and this formed the basis of the Oracle Excellence awards. The FMW4Apps team also worked with OTN to provide images of each of the applications and SOA suite so that we good demo this on our PCs. Oh how I wish I could have a Fusion Apps image on my PC! At that time my concern was that the stories they showcased were all very big exciting projects and the reality was more modest. I ran a survey amongst my ACE Director colleagues which then formed the basis of my 42 Real Life Examples of Fusion Middleware for Apps white paper and subsequent presentation; what was clear was that back then IT drove the adoption. 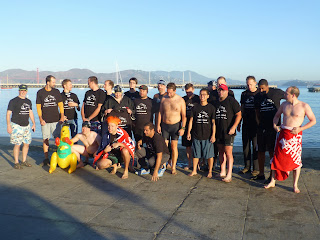 Today it is business that drives most projects, business has to find the funding, and AppAdvantage is looking to showcase the different business drivers. The SOA Partner Community (run by the excellent Mr Kress) suggest that fellow ACE Director Mark Simpson and myself might like to get involved.  We had a few calls with the team before OOW and as well as agreeing to rerun my survey and rewriting the paper both Mark and I have agreed to write regular posts for their blog. Mark will be the technical content and I will showcase some of the examples collected. My first posting aired just before OOW.


The ACE Director briefings is also an opportunity to catch up with friends and make new ones before the rush of OOW. Although some of us did take timeout for the now annual swim in the bay organised by Chet Justice. However some of y colleagues should amend their 'I swam in the Bay' T shirts to read 'I got wet in the Bay' as just going in does not count. Great cable car back to Union square and off to OOW for the main event. 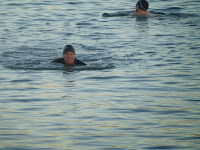 Thanks again to Vikki and Lillian for an excellent event and looking after us all year, and for the brilliant cagoules.
Posted by Debra Lilley at 18:45