In 1987 I completed a project in Hong Kong when it was under British rule, so visiting Hong Kong was high on my list of places to go back to. Also this event Quest Asia was not strictly part of the OTN tour but had been added whilst just at OOW when I discovered it would fit into my itinerary. Quest is the user group for JDEdwards and PeopleSoft and I did once before take part in 2006 in Singapore. I like Quest, they understand how important it is for their users to see what is coming, what is on the oracle horizon and have played an active part in the Product Development Committee from the outset. They also seem to like me and at Collaborate this year they awarded me a 'friend of Quest'. 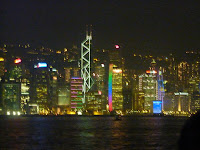 I arrived in Hong Kong about 6pm after a trouble free flight from Beijing on Air Philippines. Just about 3 hours so not bad. I decided to treat myself and get a taxi to the hotel as I was tired and I wanted to maximise the time I had to spend with the Quest crew, all friends that I had had no time to spend with at OOW. The Langham hotel was beautiful, very colonial and luxurious, I loved it.
The event was single stream and I presented twice. All conferences rely on vendor sponsorship and as this was a free to attend event this sponsorship is even more important, but there is a line between a good vendor presentation and a straight sales pitch, not all vendors stay the right side if that line.
My first presentation was Fusion Apps architecture including the UX demo, which seemed to go down well and I got good feedback. One gentleman from china had travelled over just to see this presentation. I was followed by Sue Shaw a fellow ACE program member who presented on her company's upgrade plans and the features of the version of JDE they were moving to. Then at the end of the day I gave my new 'Consolidation to the Cloud' presentation, still no words on the slides and again it went down really well. This departure from the normal kind of slide deck is proving to be very popular especially at the end of a long conference.

That evening I went to dinner with the Quest crew and we found a lovely restaurant where the food was great except for the garnish on the plate of chicken! Then we walked down to the harbour for the Symphony of light laser show.
The next day they were visiting Macau but I had to fly onto Manila so could not join them, despite the constant but well placed badgering from Daniel Strassberg the Quest Asia President. I travelled with them by metro to Central, walked up to the Victoria Peak tram although the view from the peak 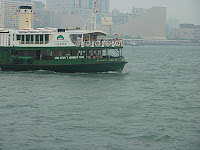 was pretty poor due to the early morning fog. Then I travelled back down to Central in a little green minibus. I then took a bus to Stanley where I stayed all those years ago, walked around Stanley Market and then back to the harbour where I caught the Star Ferry (1st class) back to Kowloon and the hotel. I went back to the airport by shuttle bus only this was more luxurious than many business class seats I have been on inflight.

It was great being back in Hong Kong even if it was just a flying visit
Posted by Debra Lilley at 20:51