Great start to the trip to china, discovering that Air China is part of Star Alliance, so Ronald Bradford and I got a chance to use the lounge for breakfast before our flight and more importantly got a row to ourselves, as we both needed to work. The flight was about 4 hours. Luckily we were not the first to arrive in China so had been forewarned about taxi scams.

Taxi scams -I feel I could write a whole book on this, and yet as I type this on my flight out, I have newspaper telling me why taxi drivers have it so hard in china.

Having arrived at the hotel we encountered another scam, the mandatory upgrade -yes about 25% of the quoted price. Our host Shi or Marshall was at the front desk and said it was normal and OK. My 'upgraded' room was ok, but some speakers had filthy rooms and no air conditioning that worked, and several room changes later gave up and moved hotels. I however loved the pool.
I love travel and the cultures that I get to experience, and so I was pleased when Kuassi who had been a few times before, took us to the Laoshe Teahouse, for a show, which I can only describe as 'Beijing's Got Talent'. But I get ahead of myself; I met the best taxi driver of my trip at this point. There were to be 6 of us to go, so we called two taxis, then as we were getting in, someone was taken really ill so we were down to 4. We could have all got into one but felt guilty as the taxis had come out for us. Kuassi and I got into one and Murali and Francisco got into the other. I have learnt that many taxi drivers abroad drive in a way I find very disconcerting and this one was no different. His seat belts were non existent. I kept thinking we were having near misses and then would tell myself I was over reacting, until we were hit by another car. I saw the car come towards us, thought it had missed, breathed a sigh of relief, then it hit us, hard. Kuassi was sat by the side that was hit, and luckily he was ok. I put my hands out in front of me to take the force and my wrists both hurt but I was just really shook up. Enter the great taxi driver, the others were a few cars behind and their taxi driver saw the accident. He pulled over and the passengers who hadn't seen it were a bit concerned till he reappeared with us. I don't know if we gave him a tip I was still very upset, but he deserved one. 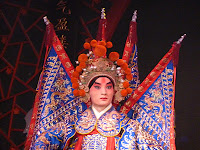 The tea house was a welcome sight and some of the acts were literally so foreign to me I found them difficult to understand, but there were also some good ones. A man who juggled and spun enormous pots was fantastic; a shadow puppet man who had created people singing was excellent (I just wish he finished his act at this point). I loved the face changing dance and the finale of the young marshal arts boys was brilliant.

The conference was two days, but Ronald and I missed the first Day to take part in Japan so next day was our day. I expected translators but Tim Hall explained that our slides has been translated and the audience would listen in English but see the slides in both; however not the case for me, it was decided as it was a business presentation most people would understand. We were also told that nowadays many people understand English much better than they speak it. Disappointingly my session was against one in Chinese and my audience was small, however I got a great question afterwards which proved he at least had understood and that made me feel great. In china I gave my 42Real life examples of Fusion Middleware with Apps presentation. 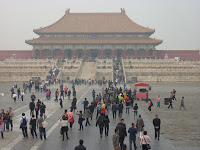 I was finished by lunchtime, and in the afternoon, Murali, Kuassi, Tim and I went off to find Tiananmen Square and the Forbidden City, we got a taxi from the hotel and paid the metered 17 Yuan fare. The square provokes memories if what we in west remember the square for, but other than that is simply a square but the Forbidden City was very impressive. One thing I did find funny in china, was that most translation seems to be courtesy of Google translate and with no additional checking. This great afternoon was spoilt though by trying to get home, it took over an hour to find us a taxi, and even then it was for a negotiated rate of 80Yuan, the battering for this was done on the dirt of his taxi. We had the right change having earlier discovering that you get 1Yuan change regardless of what you give them. 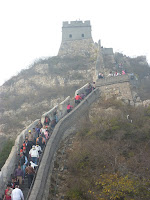 The next day we visited the Great Wall and this is what I was looking forward to most of all. Unfortunately the Smog, which never lifted since we got off the plan, meant visibility, was very poor, but it was a great experience, and I was very proud of myself climbing as far as we could in the time allowed. We then visited the Ming Tombs and our guide was really good telling us about the site and more importantly the legends. Again however it was another lesson in a different culture. The hotel offered a day tour for 800 Yuan each, but Kai who is native Chinese told us this sounded expensive and came back with an offer that eventually cost us 300 each. We were very pleased with the driver and guide and had the money ready to give them a tip which we were told is not expected in China, but to me she spoilt the day by asking for one when we got back to the hotel.
Then we went shopping which to me was a horrible experience, I don’t feel comfortable with hard sell or with bartering and in China they are experts at both. I am not saying they are wrong, this is China and their way of doing things but for me it was too uncomfortable. we did however venture onto the underground and although incredible packed, it was clean and efficient; Should have done that before.
My # 2 highlight was the wall, #3 was the hotel pool, no facebook and twitter was difficult, the scamming and battering I didn’t like; but my #1 highlight was being asked a question that showed my presentation was of value. Sharing is what makes this all worth while. Thank you, Marshall and your team for inviting us to Beijing.
Posted by Debra Lilley at 04:37