Insync10 - what I learnt

I recently wrote about getting ready for Insync10 and all too soon it was apon us. Melbourne is a long way from Belfast and quite a journey.

I met up with Mogens Nørgaard at Heathrow and we were very pleased to find ourselves travelling in an A380 to Singapore. Mogens is 6'3" so having the extra leg and head room was really good. We had decided to break the journey in Singapore to visit with another OakTable member Tanel Poder. Tanel and his wife are from Estonia and have actually since moved back. We had a great time with them and other friends in Singapore including the inaugural OTTTTT but more about that in a later posting. 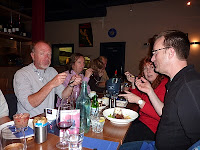 After two days but only 1 night in Singapore we were off to Melbourne arriving mid morning on the Sunday. The conference was held in the Melbourne Conference Centre and the Hilton Coffee Shop seemed to be the place all the speakers were hanging out in as we waited for rooms to be ready. 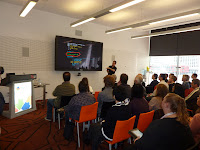 The conference had 700+ people which is a big growth from last year in Sydney and had a real buzz. I had a great time, meeting old friends and making new ones. 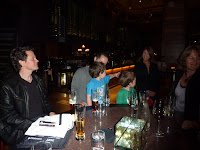 I had once met Connor McDonald at UKOUG and made the point to say hallo as he was Fujitsu, but in those days I didn't talk to the very technical. That has all changed and I really looked forward to watching a presentation where there are in excess of 300 slides. Yes 300, and honestly you simply don't notice. I met Kyle Hayley someone else I had heard off and read his blog but never met before. I caught up with Tom Kyte and Francisco Munoz Alvarez who both arrived Sunday and left Monday for New Zealand. It was lovely to catch up with Richard Foote but I did miss not seeing Chris Muir, although I did meet his boss Penny Cookson who I loved. Later I also saw Ed Roske and Stephen Feuerstein so there really was a 'geek fest' but back to that later.

On the Apps side of the house, where I actually speak I met up with Bambi Price, Sue Shaw who now she is immediate Past President of Quest has been able to get back to presenting, Luke Hodges and Daniel Strassberg from Quest.  From Oracle Cliff Godwin and Nadia Bendjedou were there, great friends I love that my role allows me to see often. I also met Gary Greishaber from the JDE stable at Oracle and Margaret Mills who I met in Colorado a few years ago. I love to mention friends but hate that inevitably I will miss some out.

Bambi Staverly and John Bushell who along with Daniel and many others were responsible for Insync10, asked  Mogens and I and others to present later in the year in Perth. I am really honoured and am happy to do so remotely but just cannot justify or find time for another visit 'down under'. Now it may simple read that this conference was all about personal networking but that isn't true. I went to give 2 presentations on Fusion Apps which I give regularly and as I have said before I like to also learn both about Oracle and about presenting from others. I attended 2 sessions each from Tom Kyte and Mogens plus one from Connor. I may be all about the Apps but people who talk about performance and issues in the technology are very important, I have learnt so much about how to approach problems, what to look for etc. I also learn about new features and then look to how they have been utilised in the applications.

I don't think I will be copying Connor's 300+ slide approach but I have underlined from him about the importance of  knowing your presentation inside out. He started to overrun a bit and decided to remove one example, and he knew exactly which slide number to jump to, not a moments hesitation, almost seamless.

I also like to push myself with new presentations, although I have 3 accepted for OOW that are all new and wish I had more time to bring them together, however for Insync I was trying not only a new presentation but with a co speaker. Mogens writes for the UKOUG Magazine, Oracle Scene. In his own charming and sometime controversial way he entertains and educates our readers. He once wrote about how his company moved into the Accelerators approach to Oracle E Business Suite and how this was encouraged by his business partner who normally had nothing to do with the Oracle side of things. The article 'How Apps Finally Got To Me' is as with all Mogen's content accompanied by a video. He and I were discussing this some time ago and I was really impressed that I finally had an out and out techie person talking apps. When he was asked to present at Insync I joking said 'let's so a joint presentation on Oracle Business Accelerators', and he agreed! Not only was that a risk in itself but we decided to look at it from the Partner's viewpoint. Why had Miracle and Fujitsu decided to take this approach? Many traditional System Integrators have not, why did we think it made sense and what were the benefits to us? Often I hear people say, what they want is more user stories, and yes we had a couple of case studies but we did look at it from our side. During the actual presentation we got a lot of audience interaction and I would say it was actually very successful (although Insync had no formal session feedback). However, I get ahead of myself, I had never actually been involved in OBA myself so spent time with colleagues in Fujitsu who had and need to thank them for their time. I also spoke with the Miracle project manager to ensure I knew their side of the story and pull together some slides; Mogens may not use slides, but I do. I was very nervous when the time came to present, but probably more about what unrehearsed comment Mogens might have come up with, (who am I kidding there was no rehearsal); but he behaved and at the end I wanted to do it all again.

One visitor to the conference was Simone Lemming Andersen of Strategic Communications Ltd, Denmark, someone who advises people who have a public profile, much more than an Image Consultant. She very generously agreed to watch me speak and give me feedback. She gave me advice about what to wear, one the first day I introduced Mogens and was wearing trousers with pockets, subconsciously I put my hands in them. She told me to wear trousers without pockets and when I gave my own presentations I followed her advice and did fell better. She told me which hand movements were good and which not so, advised that a little makeup would be good because of the lights, what to do with my eyes when having a pause and how to interact with the audience. She also gave me great advice about what to do when sharing the stage, and finally she gave me some feedback on my own slides. What she did best of all was gave all this advice through praise for what I do well and how to enhance that, rather than by a list of don'ts. This kind of advice on a one to one basis is invaluable and I know how lucky I was to receive it. I hope I am disciplined enough to follow through.


So I learn a lot at Insync10, about me, about Oracle Technology and about presenting in general. Thank You to everyone involved.

apologies for mis-representing you Connor