The keynote for Collaborate was this morning with Charles Phillips and he had a lot of good things to say to an audience who wanted to hear them.

He also announced the launch of BI Applications 7.9.6 and EBS 12.1 and also talked about PeopleSoft 9.1 expected around Collaborate time.

Obviously people wanted him to talk about Sun and he didn't disappoint within what he can say, he explained it was the 57th Acquisition and is simply an extension of their existing strategy.

He talked about the excitement of having the operating system and the hardware and how it meant they would be able to deliver value at all levels.' Apps to disk'. Investing in the future of Java is also key. 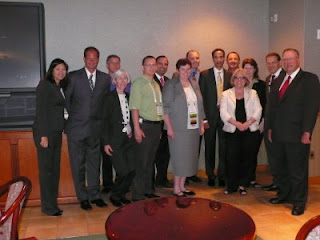 Charles talked about how Collaborate gave Oracle the opportunity to give mid year announcements to customers rather than via the press.

Another tradition Charles has is to take these opportunities to speak to user group leaders and this too was a very sucessful meeting.