KSCOPE is an event I love, and an event I go to, to learn. Membership of ODTUG is something I choose to pay personally. It covers the technology behind the Cloud applications , and whilst we don’t have access to it, I want and need to know how it works. This year KSCOPE was in San Antonia in the JW Marriott resort.

As in previous years I have signed up before the agenda is ready, and although I wasn’t presenting this year, I was asked to facilitate a discussion on the value of user groups. The agenda when launched talked about the development tech being merged with the database but in reality there was not a lot of my content.

However having booked my ticket and knowing how much fun it would be I still went. I didn’t need to have worried; it was excellent.

At the beginning of June, Danny Bryant and Opal Alapat, the conference organisers asked me to get involved in a little game they were playing. On the first evening they were organising a geek meet, and the idea was 4 community leads would prepare a very short but very technical presentation in their area and then they would draw lots to see which one they had to present. Danny and Opal wanted to throw in a curved ball and add a fifth; me. So whilst I didn’t present a PaaS4SaaS presentation I did write one. Keeping it a secret was the hard bit.

One of the things I love about Kscope is the community service day, held the day before the conference, where they try hard to give back to the place where it is held. This year was Haven for Hope, a campus for the homeless. Please read about it it is an amazing facility, the largest of its kind in the US. Almost 70 ODTUGers take part and my group painted the railings at the security hut. It was hot and humid but we did have shade. I was very impressed that the colour we painted was a great match to my nail polish. I was painting in a group with MariaColgan and we laughed all day.

The conference kicked off proper on the Sunday and by then I had been asked to facilitate another session, this time on re-examining project management for IT projects, so I spent part of the day preparing that.

In the evening was the geek game night and the secret was killing me. The 4 geeks were Edward Roske - EPM, Bjorn Rost - Database, Stuart Bryson -Business Analytics and Scott Spendolini -APEX. The first guy up Bjorn had my deck. He was really good, but by then Edward Roske had introduced a shot of bourbon between each of the 5 slides . I hope someone taped the event, as it was really funny. Once they had my deck, they were convinced Stuart had written it. By the time it came to reveal myself, there had been a lot of drinking, and I was worried for about 30 seconds I would be expected to drink, when Danny offered to do my turns. I didn’t score very well, I think they got upset when I said OBIEE was like Discoverer.

Monday the main sessions started and I signed up to be ambassador for the sessions I really wanted to see. Over the three days I attended a number of Essbase and ePBCS newbie sessions, which have given me the insight I need for Financial customers. Essbase is baked into the application and  more and more customers are buying ePBCS.I spoke to a lot of the partners in this area to understand how they approach these offerings.

I attended one session in ePBcS, from the Children's Colorado Hospital Foundation. I selected this one becase I have a friend who I sponsor for the Courage Classic Bike race in Denver which is their most important fund raiser of the year.

The project management session was really well attended for a last minute addition to the agenda. The panel was made up of Ron Moore, TopDown Consulting, Jessica Cordova, ArcEPM, Kent Graziano, Snowflake Computing and Rhonda Brigham, Starbucks.Whilst the discussion was good, the outcome was good project management hasn’t changed. The tasks may be different, but planning and communication are still the most important. I loved the discussion about meetings / emails; what is enough without being too much?

One of the sessions I was ambassador for was Alex Nuijten on 12c for Developers. Alex went on to win the best Database presentation. well one Alex and I am sure not letting people out of the room until they completed their feedback sheets had nothing to do with you winning.Or perhaps it was his Mickey Mouse ears? The ears were to advertise that the next KSCOPE18 will be in Orlando.

I was also ambassador for Shay Shmeltzer the PM for #PaaS4SaaS ABCS. Yet again more functionality has been added and this time I learnt more about using the native phone features for mobile apps, something I will be trying out straight away. This was the only ABCS session but well attended and made me think even more about the culling of the middleware track.

The panel on the Importance of User Groups was made up of Natalie Delamar - President ODTUG,  Mike Reily - secretary and Past President, Danny Bryant - Conference Chair and Jennifer Nicholson - OTN ACE Program. The discussion was around connecting, sharing stories, learning from oracle and volunteering, gain confidence, improve ability, personal and professional success. There is no limit to what people have achieved.

KSCOPE also has a 5km race, which Maria and I decided to walk. Maria had a session to deliver at 8.30am so we tried to start early, but it was a properly timed race and they wouldn't let us, so we had to walk a slightly different route and covered only 3 km, but did see the main race set off. We later found out they had a 2.5km route and official walk; wish it had been advertised. Still we got to see the dawn, a few deer and a rabbit, but not the threatened skunk which I was not sorry about. Jaz Ribeiro from the UK won the ladies race at her first ever KSCOPE, well done Jaz.

Jennifer Nicholson from OTN along with Lori Lorusso looked after us ACEs, with a dinner; a great chance to catch up with all our friends in the program. There were a few new ACEs and promotions, most notably for me Danny Bryant got ACE Director which was announced in the plenary session and Alan Arentsen made ACE. Well done to all. 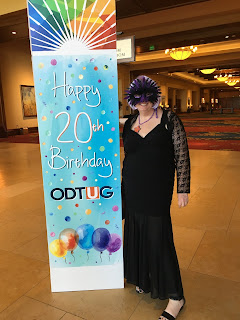 KSCOPE always throws a good party but this was their 20th birthday so they went right out. I love the fact you get to dress up but this year there were 4 different themes and it was hard to choose. There was a beach theme were we were encouraged to bring out the white clothes from the Miami Beach Party a few years back and I was tempted but there was also a masquerade ball theme and any excuse for a long dress. So I combined the mauve wig from the beach party with my party frock and mask. Most people one who I was, but I did catch Darlene (Tim Tow's wife) out. Loved it. However I am getting old and was home at a reasonable time.

KSCOPE celebrate Women in IT with a lunch discussion and i was proud to be a facilitator. This year they had 'Dear Alice' questions for each table to discus. On my table I had 2 gentleman which was refreshing and our question was 'I am one of two architects on a project, with 6 developers, all men. Whenever they have a question they ask my male peer. He often refers them to me, when I am the best to answer but how do I get them to come to me first?' The discussion was about confidence, empathy and encouragement, and ways for her to demonstrate her ability and openness. There was quite a debate about cultures, geographical, age and religious, but everyone agreed it is possible. KSCOPE also launched a WIT magazine, to share stories and encourage.

Once the conference was over, I had a chance to do some whistlestop tourism and joined Alex Nuijten, Alan Arentsen and Roel Hartman for a trip downtown. Alan impressed me with his UKOUG Tech16 bag.

The two main attractions of San Antonio are The Alamo and The River Walk. It was far too hot and I simply overheated, but thanks to lots of water and rests I survived; just. Most people complain they sweat too much in the heat, but I simply don't which means I overheat, that combined with not being the fittest of old ladies means I really should know better.

But it was a great afternoon, topped off with cooling down in the infinity pool back at the resort. A special thanks to Marc Sewtz for this amazing photo. 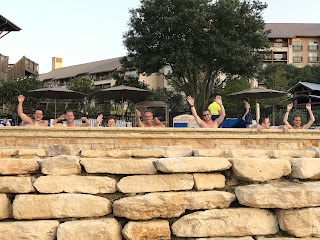 Then all too soon it was time to go home. I met up with Alan at the airport for a last lunch and a chance opportunity to say goodbye to Natalie and Danny. My first flight was to Chicago and had been rescheduled for an hour later which left me with 84 minutes to make my London flight in another terminal. Previous experiences of Chicago have not been good for me or my luggage, however British Airways who partner with American, had a shuttle bus from their domestic terminal to the international, and even better we didn't go landslide so there was no security to go through. Amazing, thank you, well done. The only sad thing was they had JUST stopped serving bacon butties in the lounge at Heathrow but it wasn't the end of the world, and I was home by 3pm.


Natalie said in the 'Value of User Groups' session that KSCOPE was a conference to be an experience' and it was. Excellent as always. Thank you.