Over the past few years you will have heard many people including myself talk about user experience and the great work oracle are doing in this area. 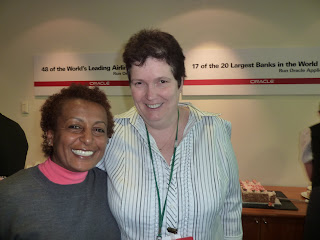 Almost two years ago they set up a usability advisory board in N. America which has met several times. Just before Oracle Open World 2009,I met with Anna Wichansky who runs this but was unable to actually attend their session at OOW. She told me she intended to set up an EMEA advisory board this year, well it has arrived, we met in TVP (Oracle's UK Head Office) today. I was proud, along with my colleague Lena Ward-Stewart to represent Fujitsu, both as an SI and a customer organsation.

There were 12 companies represented and I must commend Anna on the breadth of geographical coverage, range of industries and organisation types, there was both diversity and yet synergy. Each of the organisations gave a pitch about their org, their oracle use and their biggest usability issues. The advisory board is only successful if the members maintains confidentiality between them, Oracle and each other, so I can't share their stories but it was amazing to hear how similar things are, albeit with different business implications.

To demonstrate that Oracle really do listen Clive Swan, SVP Product Development responsible for HCM in Fusion, gave a keynote around Fusion Applications. He, as ever spoke passionately about where they are going but also an incredibly powerful pitch for Apps Unlimited, there was no confusion in his presentation, lesson here - talking about Fusion Apps and Apps Unlimited should and can be done together.
Clive talked about how usability is key to Fusion Apps but is also important to the Apps Unlimited development teams. This c level presentation was worthy of the big stage at OOW. 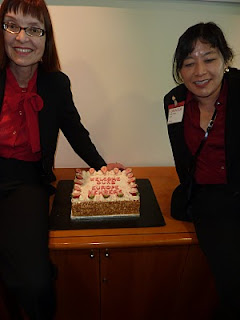 His Fusion Apps presentation today obviously had a slant on usability. In general usability will not be the biggest business driver, although the more I look at it the more I disagree with that statement that I first heard from Oracle Fusion Apps development themselves. Self service is one of the quickest ROI areas and if the user experience is powerful enough for users, their take up will be quicker. Also if your professional users can do their job faster and with less hassle it is more difficult to articulate the ROI but it is no less valuable. Oracle use KLM, Keystroke Level Modelling to compare Fusion Apps and Apps Unlimited and this industry recognised method shows improvements from a few percent to > 80, with an average of around 35%.

Clive clearly explained why usability is beyond just the screen look, he gave the example of the watch list, simple technology but really improves the user experience. Most importantly he stressed that usability was not a point in time investment by Oracle and that currently there is a push on mobile device usability.

The presentation started with the structure, the services, the processes and the role based user experience, this has been covered in public sessions by Oracle, but this was a very uncluttered, intelligent and straight forward look at the design. He talked about taking the Best of the Best processes, enhanced infused with next generation technology including web 2.0, SOA and Business Intelligence.

He talked through Oracle's strategy of Next generation Productivity, Adaptability and Manageability, focusing on productivity as that is the usability area.

Examples such as the watchlists which cover 'What do I need to know?' and 'What I need to do?' , the hierarchy viewer and contextual actions such as calendars for date fields and linking of locations with maps. Activity Guides for long processes such as on-boarding the 'How to get it done?'.

I keep saying it but some of the best speakers in Oracle work outside Redwood.

The advisory board finished after a very long day, that also included a celebratory cake, a tour of the usability labs in TVP, and an agreement to meet again, both virtually and in person. New friendships were made and I expect some will be comparing notes well before the next official event.

"The great work oracle are [sic] doing in this area".

if you want to comment, please be specific and honest enough to leave your name.

If you like I can ask for you to see what they are doing and perhaps change your opinion.

However if you chose to be negative with no specifics and no name,your voice is not heard