My friends on facebook will know I have struggled to get back into the swing of things post Open World. The 26 hour turn around between arriving home and being back on the road was OK, I like being busy but the last week has been harder but expect a complete fest of posts today, I am on a roll!

My headliner for Oracle Open World was obviously Fusion Applications but this year there was actually an awful lot going on.
I think I will quickly cover the other important things and then come back to Fusion Apps in the next post. 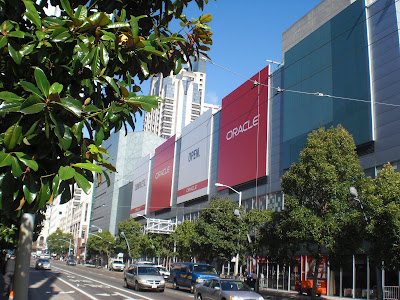 Oracle kept the Complete Open and Integrated strap line which is I think quite a testament (although Integrated was the first thing to go Friday when the events people started to strip the Moscone).

The first keynote was Rather like a goodbye speech from
Scott McNeally – reminiscing. This Oracle-Sun keynote very credible and strong support from the audience. I personally hope the acquisition is approved quickly so that both organisations can move on so that the users can see what it means for them. I think it will be a good thing, there is plenty of competition out there and as long as Oracle don't make the mistake of shipping everything on SUN only, customers will continue to have choice and integration. I thought the Java and Solaris components were more important than the tin but then Exadata is now all about the tin so Larry never fails to surprise. 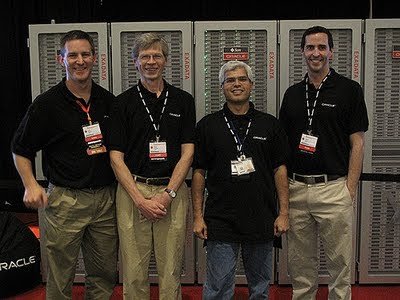 On the left in this photo is my great friend Dan Norris, who has given up his ACE Director status to join Oracle in the Exadata team and he is one excited person who is loving his job. His enthusiasm about what Exadata can do is so obvious. I have no doubt he and the team he is in will be busy with the big $10 million dollar challenge that Larry threw down to IBM users.

Charles and Safra had a joint keynote and Safra made a joke about Open World being called 'Open' as part of the Complete, Open and Integrated message. Luckily they then kept to technology and had a number of demos of where their applications are being integrated to give industry solutions. They talked about how they didn't realise how difficult it was to integrate separate systems until they rationalised Oracle's internal IT a few years ago.

Thomas Kurian talked about the innovation that has come from the development and about the breadth of that innovation. The headliners were FMW 11g and the latest release of the database. He stated every second of every day someone downloads an Oracle Product.

In Larry's main Keynote He talked more about SUN and Exadata, he talked about Next Generation Support.My Oracle Support in the Cloud unified with Oracle Enterprise Manager on premise. Patching proactively based on your configuration. When it arrives, if users adopt it,, this will make a real difference. Then he talked about Fusion Applications. I was very worried I really thought it might get dropped. The first presentation in the slot seemed to go on for longer than I expected, then Larry started his presentation and then introduced Arnold Swarzenegger to the stage who was excellent but when Larry took back the microphone we eventually finished 45 minutes late. 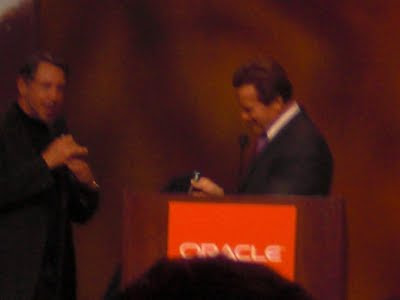 Arnie was fantastic, he played the 'dumb foreigner' made jokes about himself but actually had a very important message, that technology is key to success in so many areas. It was a motivational speech and very funny.

This year Oracle had all the keynotes on a Live Stream which was great especially the day I couldn't leave my hotel room because of the rain. But don't be fooled in thinking it is an alternative to being at Open World. Yes it is great to hear the leaders on the main stage giving you their spin on the message of the day, but the real value is in the smaller sessions and the demo grounds talking to the people in development and anyone you want to meet in the Oracle World is there.

In fact another great friend Mogens comes to open World every year and often does not even enter Moscone. He takes over a local hostelry and meets up with all those he needs to over a beer. This year he held 'Closed World' were each day a speaker from OOW had a more in depth technical opportunity to interact with the greatest Oracle minds around.

But if you weren't able to get to OOW Oracle did interview each keynote speaker and record short videos which are well worth viewing.
Posted by Debra Lilley at 08:38

So what is the real world comparison between ExaData and Netezza? The reason I ask is that there are reports circulating at our work place saying that Netezza can run rings around ExaData and that we should stay away from it. Under what conditions will Exadata be a dog? We have Oracle Text features in our application which is also high volume (> 3 million inserts per day) environment and over 500 users doing queries using Oracle Text "contains () > 0 clause.

Unfortunatley Exadata is far too technical for me. theer si a demo on youtube http://is.gd/4HKOD but for questions I will ask Dan. But a question for you, who is circulating the reports at your work? A netezza account manager? Someone sounds frightened to try. I would be asking Oracle to do a benchmark test for you, let the results answer your question

I'm curious where you're getting your "reports"--I suspect it isn't from Oracle, maybe from IBM or Netezza? :)

Oh, and I don't think that Oracle Text will work on Netezza's platform at all.

You need to make sure you're getting both sides of the story when making an evaluation. Certainly both sides will put their best foot forward and you need to ensure you gather all the information before even considering a decision. If you need more information, I recommend you start with contacting your Oracle Sales rep. If you don't know who that is, 800-ORACLE1 can connect you.

This on difference between Netezza and Exadata, the Exadata SIG is a great place to discuss such issues. Once can join that at http://OracleExadata.org

We will be scheduling more such discussions via web based panel...
Thanks

The "benchmarks" that are being talked about are from work done in the UK by "sister" companies who are doing the same kind of applications that we are.

I do not think that these bencmarks take the complete picture of the environment which has a ton of inserts to feed the DW and then a ton of queries mostly of the '%variable%' kind.

Glad to know that the actual results from ExaData are much better than Netezza.

I am just the small cog or non at all in the decision making. I just have to make things better by not changing any code or settings!