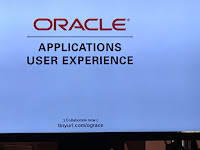 Another of my now traditions pre #OOW is the UX training at HQ. The UX advocates within the ACE program come together and learn all that is new and product direction. Since the first talks of Fusion this has been baked in and to me it IS what makes the applications SELL.

The most interesting discussions of the day were around chatbots.  Oracle has a great video to show use this, which to me is a bit weird but I was misunderstood when I made a comment, and have a separate post on my luddite thinking. 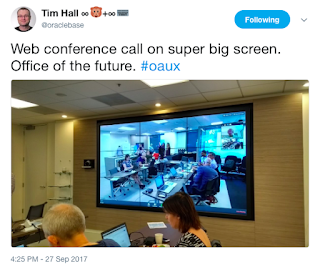 Last year when we were there they were building a smartoffice and this year we got to benefit from this. A few people were remote but the system made us all feel like they were part of it. You just had to remember you were also being seen by them.

To me, what was important is that the key principle of simplicity is still central to everything they do in the UX team.

I am reusing an old presentation over the next few months, about how Fusion or Cloud Applications hang together, and although in every area the technology and UX have moved on, the design principles remain. 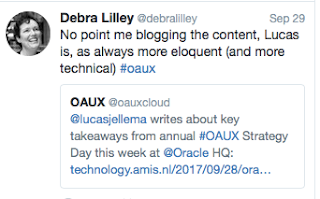 Then the developer side of UX is about making all that research available, The Rapid Design Kits, help when you are designing or writing your own applications. We have used them in ADF with our development partners eProseed. They are also mainstream for mobile, and now being made available for both Jet and Chatbots alongside the relevant development cloud offerings; and at no extra cost.

Both Lucas and Tim have written more technical posts on the day so sharing them covers off the hard bits. 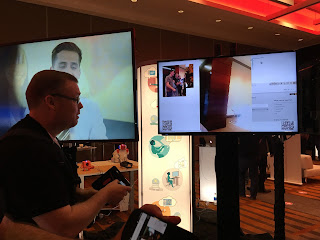 Then during #OOW17 they had their exchange. It was a bit far from the main Moscone so they put on transport, which I have to say scared the life out of me once it moved off into the traffic! Anyway I met up with Tim (oraclebase) at the event. He snuck into a UX training day last year, as his employer is implementing cloud applications and although not directly involved he wanted to learn more. The UX team fell in love with him and now he is very much part of the extended UX Ace Team.

They had demo stands to show chatbots, blockchain, AI and the new RDKs. 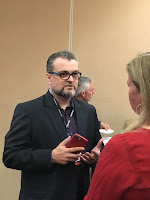 Then Wednesday I joined a UX Advisory board luncheon. A chance to speak to users who benefit from an ongoing relationship to the team. Jeremy Ashley, the GVP who heads up UX includes outreach in everything his team does.

And if I am ever forgiven for my comment, I hope to be back again soon.