This year the ACE Director briefings were a little bit different.

There was a single day of content, and as we walked to HQ, I guess we were all worried that we were walking towards our own execution. There had been a number of changes to the program which sometimes looked as if funding was being cut or more difficult to get, and with the creation of the new Developer Champions Program; were we on our way out?

Even being at the ACE Director briefings this year was harder, as funding was subject to you having a session in the main conference hence the numbers attending were down.

It didn't help that the first item on the agenda was the Future of the ACE program with Stephen Chin who looks after the advocate programs. 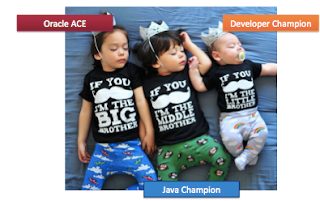 Anyway when the session started I braced myself for bad news and a picture of three babies appeared on the screen. The analogy was that the Ace Program was the eldest baby, the Java Champions the middle child and the Developer Champions are the new baby. Like in any family the new baby gets more of the attention at the start. However it was made very clear that the Ace Program is important and is here to stay. I guess it is also true that an older child can in some way stand better on it's own feet. A very good analogy. I know I felt a lot better.

I guess that also helps picture the funding angle. If you chose to have 3 children, the available funds have to stretch, and you may develop new priorities. This is not wrong.

A slight diversion from this post but I just wanted to say something about this funding. I had hoped to go to Latin America this year on the OTN tour. I have been privileged to go several times but this year the funding didn't stretch. Yes I was disappointed but actually is it a success?  One role of the ACE Directors on tour is to identify and support local speakers, giving them confidence and encouraging them to be part of the program. This year the local user groups has their own content and this year the funding was on the local ACEs travelling around Latin America. I call that real success.

Anyway back to the ACE Director briefing at #OOW17 - we all had a collective sigh of relief as we realised we won't be thrown out and we got down to the real content of the day, the briefings from Oracle.

Some advice was given on conferences that would be seen more favourably for funding, where Oracle want to concentrate on content that appeals to people who use Oracle as part of a much wider tool box rather than die hard Oracle conferences.

Although it was sad not everyone was at the briefing, it did have some benefits. We only about 40 as apposed to last year when we had 100.  It was good because it was smaller group and easier to control in discussion, it's quite hard to be heard when you've got a room of 100 people, however for those who weren't there I felt that it was sad that Oracle couldn't have done it remotely for them, however it is under NDA and that's incredibly difficult to police. I wondered whether the sessions could be recorded and not shared until the announcements are made at Open World but again that's quite a lot of work and I don't think it would be successful either.

Because were under NDA I can't talk about many of the sessions but there were a few following on from Larry's announcement a week or so before about the autonomous database and then there was several sessions around what's happening in the middleware which is closest to my area including some really exciting things about VBCS.

What was really good this year was that there was an increased desire from Oracle to get feedback. I think it would've been even better if we stuck to the two day format and had session over a longer period of time, perhaps 45 minute sessions in 90 minute slots, so that we had an equal amount of feedback. These conversations with Oracle were occasionally cut short because it was only one day, and they put sessions in back to back, with very few breaks and it made for an incredibly long day. However it was well worth it and I would like to say to Gerald Venzl the facilitator,  Jennifer and Lori who did the organisation and all of those speakers that came.  Thank you very much for yet another very successful briefing. 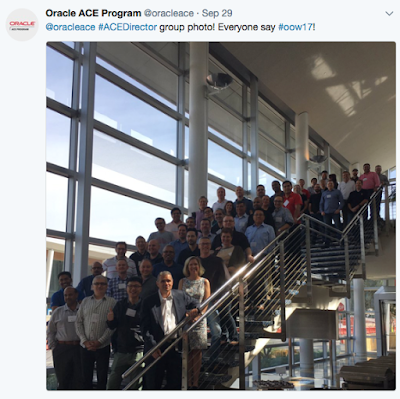 Then 12 hours after we first started at the HQ conference centre it was on a bus to San Francisco to start the Open World part of our annual pilgrimage.