In the run up to Oracle Open World last year there was a lot of talk about PaaS, making the development tools available in the Cloud, and how that meant we could extend the Cloud Applications. This was the area I was most interested in last year, and here we are a year later and there is lots of it on the agenda, albeit none of the ones I submitted, but I'll come back to that later.


The Board of UKOUG will be sighing as they read this, “Debra is back on her ‘user adoption’ curve soapbox”, they will be saying, and I make no apologies. 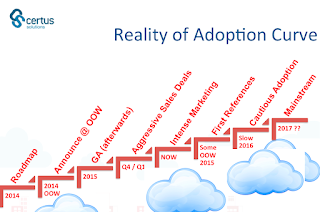 I am always (as the board know to their cost), going on about the lifecycle of a product and the adoption curve. User groups are about what the end users are doing so we cannot be just a repeat of an Oracle event. Users want to know where Oracle are going, they want to see the new products, but this needs to be balanced with getting the most out of what they have today and how they use it. A couple of years after a product is talked about by Oracle the most popular user group sessions are on the actual upgrade. 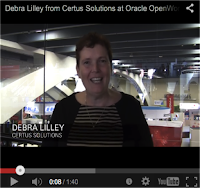 Last year when I joined Certus PaaS4SaaS was one of our priorities to understand, and during and after OOW I spent a lot of time digging and appraising(including this video). At the end of January we along with our development partner eProseed, took part in a Proof of Concept workshop with Oracle Development.

In March we were jointly awarded the FMW Partner Community Cloud award, for not only taking the initiative in understanding this and running a POC but for sharing that information back with the community.

Just last week Certus won Silver at the customer voted UKOUG Partner of the Year Awards for this same piece of work under the emerging technologies category.

Inbetween I have done video clips for OTN and Alliances, An article in Profit magazine and been featured in a Forbes article.

eProseed and I are also manning stands at the Cloud UX Exchange on Monday at OOW and each have a 20 minute session in an OTN Cloud showcase at OOW on Wednesday. You will not be able to attend OOW without hearing about PaaS.

Back to my maturity curve, customers still aren't ready mainstream, but they are starting to think about it, more so because their account managers at Oracle are offering attractive rates, but they are still thinking you cannot change SaaS, so need to move their mindsets on.

We do speak to customers who are asking about PaaS4SaaS but the things they ask for have to date all been things we can do through the powerful configuration available in SaaS. Some Oracle salespeople have asked us to write feature gaps in PaaS but actually that is not economic or worthwhile if they are already on Oracle's roadmap. But it will come, several years ago I wrote a white paper on '42 Real Life examples of FMW with Apps' and it was all about people using new technology to do old things. Wind forward a few years and there is real innovation in FMW.

I have seen a great example of using PaaS to help with maintenance in SaaS in FXLoader, it doesn't have the UX I want, but it is a great app and being used by customers and sold through Oracle's MarketPlace.

In a few years PaaS4SaaS will be mainstream and Certus will be ready. In the same way we got in early to understand SaaS. As that has become mainstream the market is flooded with partners trying to get into it, or catch up with what that means. Certus has done that homework, already seen as an influencer in PaaS4SaaS and yet has not had to deliver anything yet. I have however spoken to big audiences at about 20 events this year, we are at the customer interest stage.

Perhaps next year we will have reached the next step, and will be sharing a case study....