First Impression of Trinidad was how big it was. I have visited Barbados, Antigua and a few other islands before but Trinidad was not quite what I expected. It is beautiful but I without stepping in the ocean doesn't quite feel like we have been in the Caribbean, however the welcome from our hosts was truly Caribbean. 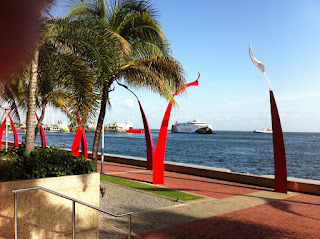 We are staying in the Hilton, known locally as the upside down hotel as reception is on a cliff top and the rooms are on floors beneath. We must stop going to Oracle travel hotels and find out in advance which is closest to event. Last night after the conference we were entertained by the user group in the Hyatt next to the event which would have been easier to stay in.

The conference was hosted in a government building with a mixed audience so I think each of us tweaked our presentations a little but it was fun and a good debate around Oracle Licensing rounded off the day.

Patanjali gave his great How Fusion Middleware Built the Fusion UX presentation and I followed with a demo of Fusion Apps and the great 'Should I upgrade or go straight to Fusion Apps?' question. There were a number of organisations in the audience asking just that question.


I was particularly impressed that my employer Fujitsu was one of the two sponsors at the event and I had the opportunity to meet with them earlier in the day. 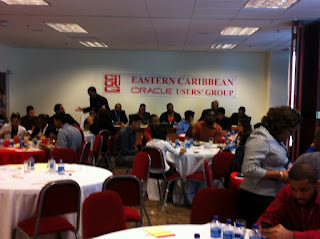 The Trinidad User Group or their official title of Eastern Caribbean Users' Group have been going 20 years and it was great to be able to talk to them about UKOUG and how to encourage local speakers. Afterwards one of the board, Ryan took us back to the hotel and gave us a little tour including eating young coconuts from one of the many sidewalk vendors. 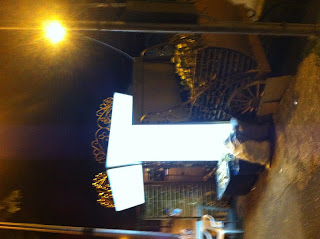 As ever too short a visit, new friends and great memories.
Posted by Debra Lilley at 17:03