We had a free day in Honduras and having seen very little of Trinidad and even less of Guatemala we were determined to see something of Honduras. Tegucigalpa where we were staying is not the typical tourist haunt and we didn't want to spend most of the day travelling so our intention was to try and find something local.

I have a personal challenge to do as many open top bus tours as possible in my life and have taken it for granted that most cities have these, but not in Tegucigalpa. The guide books tell you of companies that will create a tour but there appeared to be no, turn up for tours. we did think we had agreed with the university for someone to show us around but I think we had a communication problem and we were on our own. No problem we are resourceful, intelligent people, we were not beaten. 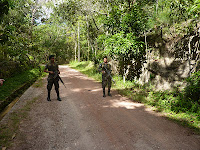 With Sheeri as our interpreter, and armed with a welcome to Honduras Tourist booklet, we pointed at the Statue of Christ, the most popular tourist destination and had a taxi driver from the hotel take us. This may seem very simple but the travel advice we get from Oracle Travel and other websites suggest that Honduras is one of the most dangerous places on earth. 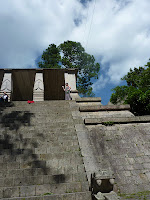 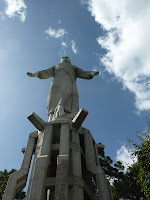 As a Christian I expected to be moved by the statue of Christ and I was but in a different way, what I really liked was that as well as being a tourist attraction the park in which it stands appears to be a place that locals come to just hang out, away from the city and to enjoy just being there.The statue looks out over the city and it was beautiful to see both birds soaring and planes landing beneath us; unfortunately I was not quick enough with the camera to capture either event.

There were also ruins in the park which made us at least feel we had seen some of the local history. 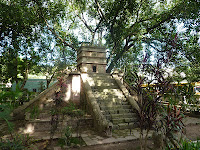 We then negotiated with the taxi driver to show us the town and he stopped in a few places including a model village of Mayan structures, and as long as you got the camera angle right it looked like we had visited far more that we actually did. We also visited the main square and drove past at lot of other sights. The taxi driver gave us a great day out and the cost was very good. 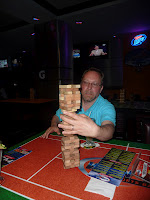 We also had time in Honduras to relax a little at the hotel and one of the things I learnt was that not only is Tom Kyte king of the database, he is pretty good a Jenga too.

Honduras was definitely the cheapest destination on the tour, as long as you ignored the hotel cost. Tim Hall may have laughed at my money conversion skills but actually $10 went a long way.
Posted by Debra Lilley at 19:07