So having left Guatemala we headed off to Honduras, not a long flight only about 90 minutes, and the journey was really good fun. There were nine OTN tour people on the flight; Myself, Tim Hall, Graham Wood, Sheeri Cabral, Tom Kyte and his wife, Joel and Ronald from Costa Rica and Sergio from Brazil. If anything had happened to that plane it would have been a very quiet conference.

As Tim Hall has already said exactly a third of the people on the plane were OTN, a math calculation I can manage, unlike the local currency. I drew out what I thought was about $100 but actually it was $10, even worse I told Tim Hall to do the same. Today we will try and find something cheap to spend our vast amounts of currency on.

The conference was in a university, not uncommon on these Latin American tours but what was unusual was that the audience was almost all students and although they were doing ICT it was not necessarily Oracle based. What I loved was we had our own OTN Tour wifi network.

There were 3 streams and the number of delegates in most sessions was quite small, however Spanish speaking speakers did better. This tells me that not only do they have good local speakers and it was great to see ACE speakers from Latin America present, but that they do need interpreters.

The day was also very long, it started 10am stopped for lunch at 12 for an hour and then continued until after 7pm. Lunch was entertaining it appeared to be freshers week and a local celebrity was singing in the courtyard.

I gave my 'What does Fusion Apps tell you about your own Enterprise' which I had to adapt to explain about old versus new programming ideas; explaining that there are applications that are not Java, do not have social embedded and where UX was defiantly just UI.

Later in the main auditorium where each delegate had about 20 seats each, I gave my 'Consolidation to The Cloud', a light hearted look at Consolidation and the benefits based on the use of my smart phone. I got a few laughs so I felt quite good but was really conscious of my fellow tour speakers being in the room. The feedback from Tim Hall especially was that same old chestnut 'Stop apologising for not being technical', and also apologising that my high heels sounded like tap dancing without the rhythm as I moved around the stage. 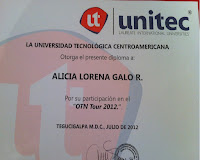 At the end of the day we discovered the students got a certificate for attending, perhaps even a credit. So I do hope they found the day useful. There were some Oracle users and in particular a couple of female DBAs who really had lots of questions which always makes you feel you did some good.

I again listened to the Tom Kyte presentation on What We Are Still Doing Wrong, and I love how he talks about about people who don't tell you the actual problem they have, and I am thinking of developing that as a posting because for me at the business end it is where people don't articulate the business impact of issues that makes me mad.

Today we have a free day in Honduras, Tim Sheeri and I are having a tour with Jonathan from the university. This tour has very much been about last minute changes and surprises and I very much think our sightseeing tour will be similar.

Thks Debra you are very special for me. Ronald Vargas.