So the final leg of the tour, San Jose, Costa Rica. We arrived at the hotel late afternoon and having discovered that the university where the conference was being held was jut next door e decided to relax by the pool. That evening we asked the hotel taxi to take us somewhere local to eat but actually it was all chains, pizza hut, a taco place, tapas and even a Hooters! In the end we decided on Outback which seemed really expensive but the company was good. 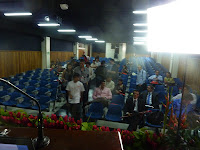 The conference itself was excellent 5 streams and somewhere just short of 200 people. There were some students but most were end users. I was meant to speak on should I upgrade or go straight o fusion but having polled the audience decided o swap to the more generic how oracle have changed apps development which I gave for the BCS. It seemed to go down well and I got  the what is happening to forms and reports question. I think grant Ronald would have Been proud of me although later I discovered that shay from that team was in the audience, he should have given the answer.

The organisation was very good, with a student allocated to each speaker to ensure we had everything we needed, drinks and snacks available all day including a hot lunch. Nothing was too much trouble for our hosts. That evening they found us a local restaurant which however unknown to them did not serve alcohol, still that is what the hotel bar is for. 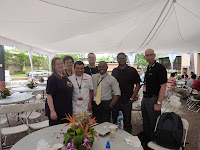 So the tour was over and although after weeks or more on the road people are ready to go home, it is hard to say goodbye. This tour had it's challenges, but also highlights and overall the user groups achieved their objectives. What I really enjoyed was the local Oracle who travelled with us, Mauricio from Costa Rica and that lovable rogue Sergio from Brazil, and the ACEs Plinio from Peru, Joel and Ronald from Costa Rica. Everywhere we go we try to encourage local speakers and their participation was great.

Thank you Justin, Lillian and Viki and especially Francisco for making it happen and to all those who welcomed me into their conferences. I spent quality time with old friends and made new ones on the tour. Delegates asked not many but a few questions that make doing this worthwhile.
Posted by Debra Lilley at 13:22